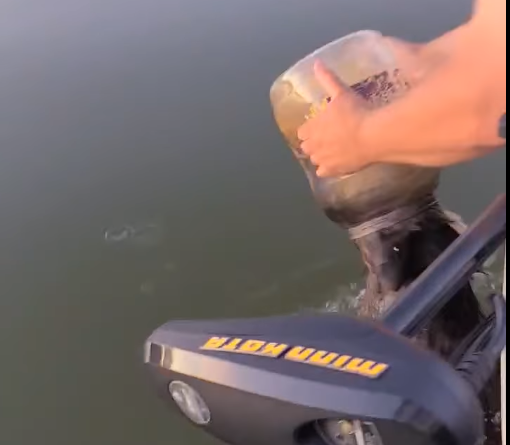 BLOOMER, WISCONSIN—A boat day out on a Wisconsin lake fishing turned into a rescue mission for a family who spotted a young bear cub with a plastic tub stuck on its head. The bear was swimming across Marsh-Miller Lake, ironically with a cheese ball container on his head in a state known as the “cheese state.”

Tricia Hurt posted a video of the rescue mission to her Facebook page on June 28.

“Never dreamt we would ever do this in our life time,” Hurt wrote in the Facebook video post. “Out on Marshmiller Lake yesterday with Brian Hurt  and Brady Hurt when we spotted this poor bear.”

The family saw the black bear as they were headed home from a day of fishing. The bear can be seen in the video struggling to swim across the lake with a plastic cheese ball container filled with an inch or so of water around its head.

“We’re trying to figure out how we’re going to get this tub off his head,” Tricia said in the video as they pulled their boat up next the young bear.

The video shows Brian pulling on the tub and a lot of splashing before he lets go. The family circles around and pulls up to the bear a second time and this time the tub was successfully removed. The bear is then seen swimming off toward the shore. Tricia confirmed in the Facebook post the bear made it safely to land.

The family told news sources after getting back to shore, they learned the bear had been spotted with the container on its head several times in the days prior, and the Wisconsin Department of Natural Resources had been looking for it, with no luck.

Since being posted, the video has been shared over 24,000 times. They video can be viewed at bit.ly/3gAlgbf.