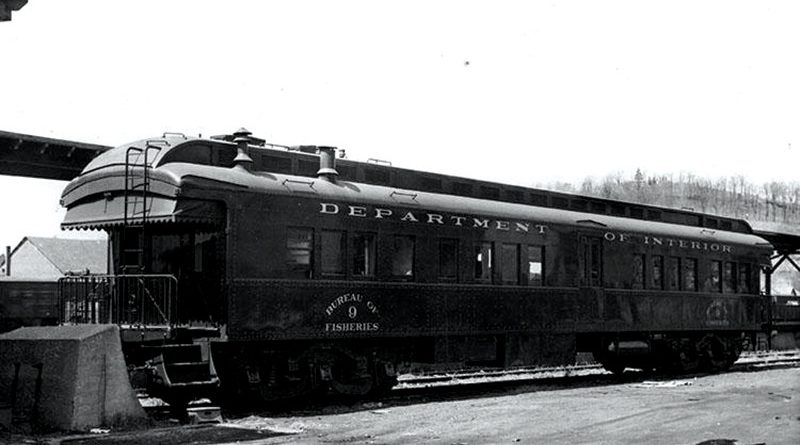 A Bureau of Fisheries fish car sits at the railroad terminal in Woods Hole, Massachusetts. The volume of fish being transported by rail led to the purchase of the first “fish car” — a baggage car specifically designed for carrying fish. NOAA Fisheries, NEFSC Historical Collection photo

WOODS HOLE, Mass. 一 From railroads to floating, to landside, fish hatcheries have had a long and interesting history. The following is information collected from the National Oceanic and Atmospheric Administration Fisheries website.

The beginnings of fish propagation work date back to 1871 when Spencer Baird, founder of NOAA Fisheries, was appointed the first U.S. Fish Commissioner. He was tasked with ascertaining whether any and in what number food fishes had diminished. In 1872 he was also tasked with the additional responsibility of supplementing declining native stocks of coastal and lake food fish through fish propagation.

In the years following, the first federal fish hatchery and California’s first freshwater fish station, Baird Station, was established on the McCloud River.

Fish propagation was viewed by many as a possible solution to depleted East Coast populations like salmon and American shad but the fish needed a way to move between the two coasts and railroads provided a safe and inexpensive solution. In August 1872, fertilized salmon eggs were collected at Baird Station and shipped to the East Coast by rail. In 1873, live Hudson River shad were transported in open milk cans by baggage cars from the East Coast to the West Coast where they were released into the Sacramento River.

By 1881, the volume of fish being transported by rail led to the purchase of the first “fish car” — a baggage car specifically designed for carrying fish. The Fish Commission eventually had 10 of these special cars. These unique fish cars were displayed at the Chicago World’s Fair in 1893 and at other major exhibitions and festivals during what railroad enthusiasts call the “fish car era.”

This focus on fish cultivation in the early days of NOAA Fisheries also led to the idea of a floating hatchery as a practical way to spawn more fish. In 1879, the U.S. Fish Commission launched its first research vessel, the 156-foot steamer Fish Hawk.

Fish Hawk was the first large vessel built by any nation specifically to promote fisheries and was docked at NOAA Fisheries’ laboratory in Woods Hole, Massachusetts, which is known as the birthplace of the organization.

American shad was a priority, but herring, mackerel, and striped bass in coastal waters were also a focus. Since species like shad run only briefly at any one location, a floating hatchery that moved along the coast was considered practical. Three-foot cone-shaped containers suspended from beams outside the vessel could each hold 7.2 million shad eggs.

The Fish Hawk was most often used for dredging and trawling around Cape Cod, the Gulf of Maine, Long Island Sound, and in other coastal waters. It also trawled and dredged out to the edge of the continental shelf stretching from Maine to Florida, exploring fishery resources and collecting organisms for study.

The Fish Hawk is famous for the discovery of 60 new species of fishes and mollusks, including tilefish in 1880.

It was decommissioned in January 1926.

Today, there are 70 national fish hatcheries across the country, seven fish technology centers, and nine health centers focused on conservation techniques and methods and the health of fish and amphibians in captivity and in the wild, according to NOAA Fisheries. They are operated by the U.S. Fish and Wildlife Service, which credits its founding to the establishment of the U.S. Fish Commission in 1871 and to the efforts of Spencer Baird.