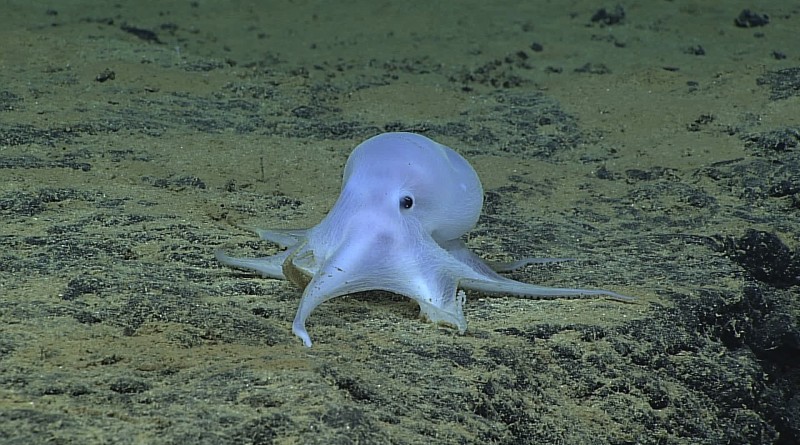 The first operational dive of Okeanos Explorer’s 2016 season got off to a strong start in February when scientists aboard the National Oceanic and Atmospheric Administration (NOAA) ship discovered a pale cephalopod – the deepest dwelling, and highly elusive, octopus.

The octopod was discovered on a flat rock while a remotely operated vehicle (ROV) was used to collect geological samples between Necker Island and Necker Ridge in the Hawaiian Archipelago, at an approximate depth of 4,290 meters (14,075 feet).

“The appearance of this animal is unlike any published records and was the deepest observation for this type of cephalopod,” Michael Vecchione, of NOAA National Marine Fisheries Service-National Systematics Laboratory, wrote in an article on NOAA’s website.

The octopod is a member of the incirrate octopods (cirrate, or finned octopods, are the first distinct group); the group is classified by the lack of both fins and fingerlike cirri on its arms and resemble shallow water octopus.

According to Vecchione’s report, it’s unusual because it lacked the pigment cells, called chromatophores, typical of most cephalopods, and it did not seem very muscular. This resulted in a ghostlike appearance. Another distinctive characteristic was that the suckers were in one, rather than two, series on each arm.

The deepest published reports for incirrates are all less than 4,000 meters.