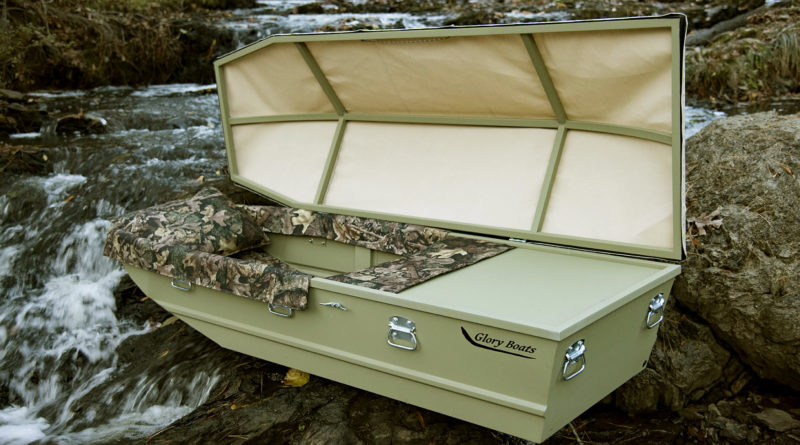 LITTLE ROCK, Arkansas — There is one thread linking all humankind together: In the words of the late George Harrison, bassist for The Beatles, “all things must pass.” From funeral rituals like mummification in Ancient Egypt to pyre of the Vikings, humans throughout the centuries have put their own marks on celebrating the dead – and now avid boaters are being represented in Glory Boats, a burial casket designed to look like a watercraft.

On the Glory Boat website, it says of the caskets, “Glory Boats are vessels to convey the mortal remains of outdoors enthusiasts to that glorious, final harbor.”

Starting at $2,800, three models are available for purchase online including Woodland Camo, Marsh Grass and Pink Camo. Each model features a steel casket with a patterned interior fabric and a canvas top that appears to be held down with bungee cords for an authentic boat look.

While the casket does look like a boat, the website does not advocate using the vessel for any actual water-related activities. Joel Schmidt, the owner and creator of Glory Boats, further confirms that although they do get that question a lot, “the Glory Boat is strictly a funeral vessel.”

“They are not designed to be water- or air-tight,” says Schmidt, “Even though they weigh only about half of what a traditional casket weighs, Glory Boats are very strong. We have weight-tested them to 350 pounds.”

The idea came to Joel Schmidt, the owner and creator of Glory Boats, after his 75-year-old father had an accident and the difficult conversation came up of what kind of funeral preparations should be made in the incident Schmidt’s father died.

Glory Boats supports their product by stating it offers “opportunities to recognize and express the distinctive character” of customers as well as being built from quality materials in American, and being a “great ice breaker for the difficult process of getting our loved ones to plan their eventual departure.”

A hot commodity since it was launched in August, Schmidt said he has received many inquiries about Glory Boats with funeral homes in Arkansas and Tennessee.

“We have been furiously building more inventory this week. Hopefully, we will be able to supply all requests.”