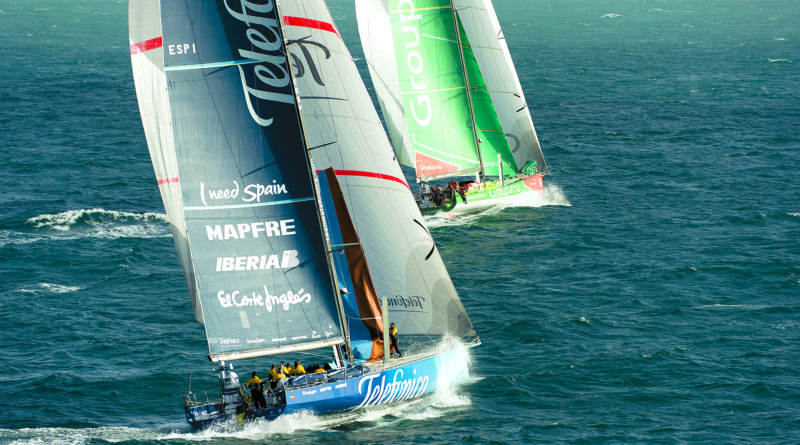 The five-boat fleet set off on a 98-nautical-mile sprint from nearby Sharjah to finish a leg that began last month in Cape Town, South Africa. The boats initially sailed to a secret “safe haven” port in the Indian Ocean to avoid pirates before being shipped to the United Arab Emirates.

Groupama overtook Telefonica shortly before the finish line to clinch the victory.

“We had one last opportunity downwind, but we didn’t really believe in it,” said Groupama skipper Franck Cammas. “Then, with a gust, we managed to overtake them.”

Groupama’s crew had to patch up their $10-million boat with plastic tape to repair hull damage shortly before the sprint, as normal repairs aren’t allowed during the race.

“This morning, we were a little worried about the repair,” Cammas said. “Now, I think we were so fast, we will leave it the way it is.”

Telefonica extended its overall lead over Camper, which finished third in the stage. American team Puma was fourth, ahead of Abu Dhabi in fifth place.

Telefonica has 66 points in the overall standings, with Camper second at 58 and Groupama third at 42 points.

The next event was an in-port race in Abu Dhabi Jan. 13, to be followed by another seven offshore legs and seven more in-port races before the around-the-world race finishes in Galway, Ireland, in July.