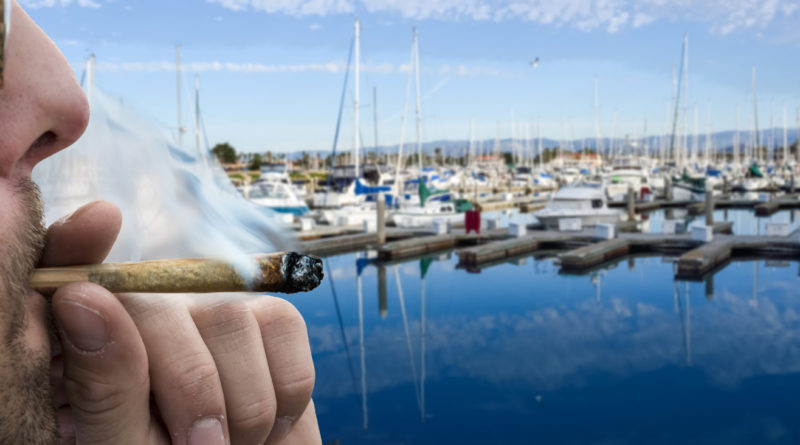 Cannabis is now welcome in California, but green on the water remains in a grey area.

STATEWIDE — The dawn of 2018 was met with relaxed excitement by California’s marijuana supporters, as recreational cannabis use became an accepted activity under state law. Lighting up a joint within California came with certain qualifiers and restrictions, to be sure, but recreational marijuana use is no longer fully prohibited.

Legalizing marijuana on land is one thing – what does California’s new policy mean for boaters?

Marijuana, to be fair, remains illegal at the federal level, which could pose issues for anyone who wants to light up a joint while aboard a boat or personal watercraft. Federal laws are generally applicable on all navigable waters. The Coast Guard, accordingly, can supersede California law and would be within its perfunctory duties to board your boat if they suspect marijuana or other drug use.

A reader-submitted letter to The Log’s editor asked: What does California’s new marijuana policy means for boaters?

“With marijuana being legal for recreational use, I can see that it would be easy for skippers and crew to believe this is no big deal assuming one would not operate the boat [while] impaired,” the reader stated in his letter. “What does that mean since there appears to be no test to determine impairment, but only presence of marijuana in the bloodstream?

“I wonder if I need to be sure to make a point of telling my friends who sail with me to be sure they are not carrying their ‘legal’ marijuana when aboard my boat,” he continued.

The Log researched the issue and reached out to various law enforcement personnel. Some elements of California’s marijuana law are clear: Recreational marijuana use cannot be consumed in public, nor could anyone younger than 21 years of age possess cannabis, for any reason.

A boater operating any vessel under the influence of marijuana could certainly be subject to DUI charges under Harbor and Navigations Code Section 655(b).

A L.A. County Sheriff’s deputy told The Log a few issues are still being ironed out by the state legislature, which means regulating recreational marijuana use on the water isn’t yet a straightforward matter.

“Some things that we may not enforce anymore are still being enforced by the USCG,” Dep. Richard Nichol, who operates out of Marina del Rey’s Sheriff Station, told The Log. “From what I understand, Senate Bill 65 is still being worked on and may soon shed some new light on future possession/ingestion of marijuana on boats.”

He added federal and state laws continue to be in conflict.

“Simple possession is not a simple question,” he continued. “It’s still being worked out and has a lot to do with the amount. This is covered under section 11357 of the Health and Safety code. Until we receive more direction from the legislature, it’s hard for me to give you any more of a definitive answer.”

There are other nuances also in play, according to San Diego Harbor Police Sgt. Victor Banuelos. Marinas, for example, can legislate their own policies governing recreational marijuana use.

Banuelos added any law enforcement agency has the right to stop or board a vessel where the occupants are under reasonable suspicion of criminal activity or probable cause of breaking the law. Any sort of legal stop could lead to Harbor Patrol officers or Coast Guard officials to conduct a sobriety test to determine whether a boat operator is navigating under the influence.

However there appears to be a grey area on the books as to how certain laws apply to boating. Vehicle Code 23222, for example, prohibits alcohol consumption by anyone occupying a vehicle, whether or not they are driving. The same prohibition doesn’t necessarily apply to boats.

The Log was unable to determine whether the Harbor and Navigations code makes it illegal to possess recreational marijuana on a boat.

Yet another question is whether the Coast Guard, in light of California’s new policy, will be more aggressive in monitoring recreational marijuana use at local harbors, marinas and ports.

The Log will continue to pursue these questions and more.

4 thoughts on “High Seas: Marijuana, Boating and You”