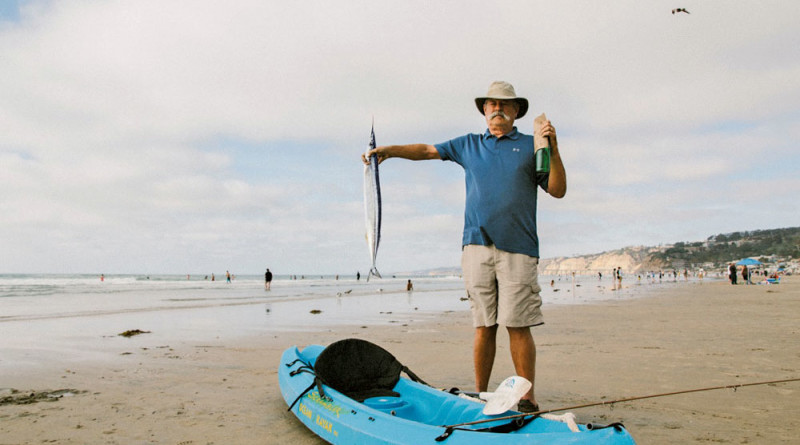 SAN DIEGO — El Niño has brought anglers some of the most unique catches during the past few months, but an angler’s catch of a Mexican needlefish near San Diego earlier this week resulted in a multinational effort to rescue a boater stranded on Na Gli Gli Island in the South Pacific.

Capt. Robert W. Hart, a boater who recently closed his Santa Barbara law practice and moved to Honolulu, was discovered stranded on Na Gli Gli Island after his boat crashed there in early January. He took his Hatteras 45 Express, I Hart Fishing, on a fishing expedition around the Hawaiian Islands when a mildly breezy and warm day inexplicably turned for the worst.

Hart never returned from his trip and apparently survived six to eight weeks before coast guard crews from the United States and French Polynesia rescued him on March 23; he has been in the hospital since being rescued from the tiny 0.5-square-mile island.

“We’re thankful someone actually took the message in a bottle seriously. I certainly wouldn’t have had I come across it,” Hart’s daughter, Steph Annie Powers, told the press from her Los Angeles home before she left for Honolulu. “We were so worried about him. We always knew he’d spend his last days at sea but we never imagined it would happen so soon. I was sure we lost him. But he’s a fishing and boating veteran and has ‘roughed it’ plenty of times, so it’s no surprise he found a way to survive on some tiny island no one’s ever heard of.”

Reed Smith, 64, of Imperial Beach was the one who took the message in a bottle serious enough to report it to the U.S. Coast Guard in San Diego. Smith found the note after he caught a Mexican needlefish from just beyond a pair of marine reserves west of La Jolla on March 22. He battled with the needlefish for 30 minutes before reeling it aboard his kayak (using live bait on a 25-pound test).

As he headed toward La Jolla Cove Smith noticed what appeared to be a bottle dangling on a wire from the needlefish’s crocodile-like bill. Inside the bottle was a piece of paper; a cork protected the bottle’s interior from water intrusion.

“I was stoked to find a needlefish in these parts. I don’t think these guys ever make it this far north. But then I saw this bottle hanging from its mouth, I thought it was just some junk he picked up along the way, you know? I mean nowadays there’s so much trash out there,” Smith said. “When I got to shore I saw there was a note inside. I couldn’t believe what I was seeing. I let my imagination get the best of me and hoped it was a message from a mermaid.”

To Smith’s surprise the piece of paper actually did include a message on it — not from a mermaid, unfortunately, but instead from a boater who was stranded on Na Gli Gli Island. The note, which was released to the media by the U.S. Coast Guard, read:

Smith was skeptical at first but decided to hand the note off to someone he knew at the Coast Guard.

“Honestly I thought it was a joke at first,” Smith said about the note in a bottle. “My friend at the Coast Guard looked up 9S 140W out of curiosity. We found out it’s somewhere out in the Pacific Ocean.”

The island is just south of the Equator, about 4,200 miles directly west of Ecuador, and near French Polynesia and the Hawaiian Islands.

Coast Guard officials did a database search of Jim Hart and the boat I Hart Fishing and learned the boat was reported missing out of Ala Wai Boat Harbor in Honolulu in early January.

Turns out Hart had left a float plan with the local harbormaster. The plan indicated Hart would be on his boat south of Oahu from Jan. 3-6. The weather for those days was in the low-80s, according to accuweather.com.

It is unclear what caused Hart to become stranded. Coast Guard officials informed The Log Hart’s boat was inoperable and mangled on the shores of Na Gli Gli Island, its radar and radio confirmed to be broken.

“I’m just glad I didn’t toss the note back into the water,” Smith said. “What are the odds a fish rare to American waters would have a real message in a bottle attached to her? That guy owes the needlefish his life.”

Smith added he had no idea where Mexican needlefish are found. After submitting the message in a bottle to the Coast Guard and had the fish weighed Smith said he would try to have the needlefish stuffed and given to Hart as a gift.

This is a work of fiction and written as a satire column in honor of April Fools Day. Names, characters, businesses, places, events and incidents are either the products of the author’s imagination or used in a fictitious manner. Any resemblance to actual persons, living or dead, or actual events is purely coincidental.