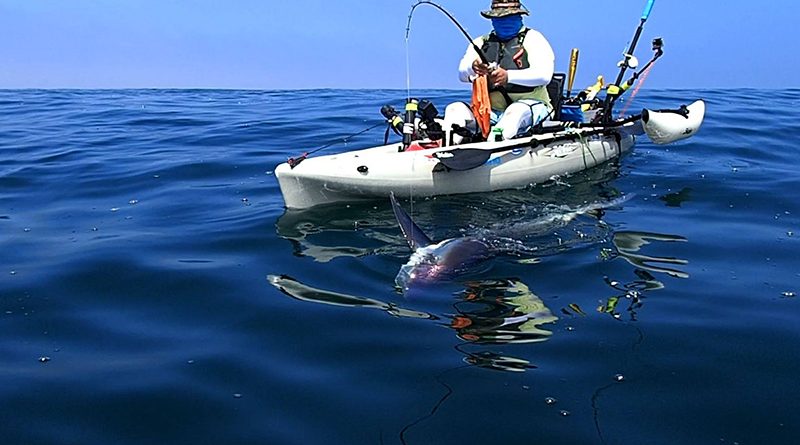 An angler did a catch and release of a thresher shark off the Southern California coast. Image courtesy of Honeybadger VooDoo Outdoors

Southern California is the perfect location for outdoor activities. With several environments just an hour’s drive, an avid outdoor explorer can see mountains, deserts, and the coast within a day.

For anglers, California offers a myriad of ways to dust off the rod, reel, and tackle box to get that perfect catch.

One way to get out on the water is kayak fishing. Anglers take to the water in kayaks a bit wider and longer than standard kayaks with their rod and reel to pull up fish close to the waterline.

Kayak fishing offers a new type of adventure whether you use it on the coast or inland. Southern California, in particular, offers options up and down the coast to allow anglers access to the water.

One angler finds the opportunities in Southern California too good to pass up and has chosen to share his experience with the internet.

Enne began kayak fishing four or five years ago after watching an angler launch out of Redondo Beach. Enne was already a kayaker and avid angler since childhood, so the next steps naturally led him to take up the sport.

Kayaks glide along the surface and can add unparalleled access to good fishing spots. Launching is a matter of being comfortable on the beach or finding a good launch lane in the harbor, and the kayak offers an up close and personal view of your catch breaching the water.

However, nothing is perfect, and the plastic vessel can offer its own challenges.

Kayaks do not cover the same ground as a powerboat, so anglers need to be more tactical when finding fish.

For Enne, one of his most important tools is a Garmin fishfinder.

“If you can understand the fishfinder, you are doing yourself a huge favor,” said Enne. “I think that is the biggest component in terms of putting fish on a boat.”

Pure Fishing, a global market for fishing equipment, also recommends using versatile, easy-to-fish lures, which reduces retying and rigging so you can get more casts in a day. After catching active fish, they recommend backtracking with a small jig or another finesse bait to coax more bites; and target several types of species in one area before moving on.

Enne’s preferred area for multiple species is Redondo Beach. According to Enne, as long as you aren’t after big tuna, you can probably find what you are looking for off their coast.

“I tried to do a video where I caught as many species as possible in one outing, and I think the last time we went out, it was at least 17 species,” said Enne. “That is why Redondo Beach offers so much for kayak fishing.”

Fishing is more than your location, and for novice kayak anglers using the right tools will go a long way. For Enne, aside from the fishfinder, anglers will need a good kayak, preferably a pedal kayak, as they free up your hands, personal floatation devices are encouraged, as well as sun protection. Then find the right rod and reel for your target species.

Another crucial point is safety on the water, wearing the right equipment, and knowing the best times to go out.

Enne recommends websites like windy.com, which offers an in-depth look at the marine forecast and will keep anglers informed on good conditions.

Kayak fishing is a solo sport requiring anglers to be comfortable out on the water, especially when you are so low to the water line. There is some risk, but there are also a lot of rewards.

Like in any sport, there will be some hit and miss, but with the right equipment and a good attitude, it can be a lot of fun.

“A little bit of adventurous spirit and be in some shape, then go out and explore and learn how to use your fishfinder, and eventually you will get the hang of it,” said Enne. “It may take a couple of trips, but it is a great sport, and if you put in the time, you will definitely figure out how to catch fish.”

Enne does invite anglers out on the water to join him for a fishing trip, check out his YouTube channel at https://www.youtube.com/channel/UCZ6hxNCSl50uMyr4gE2oaGg/featured.