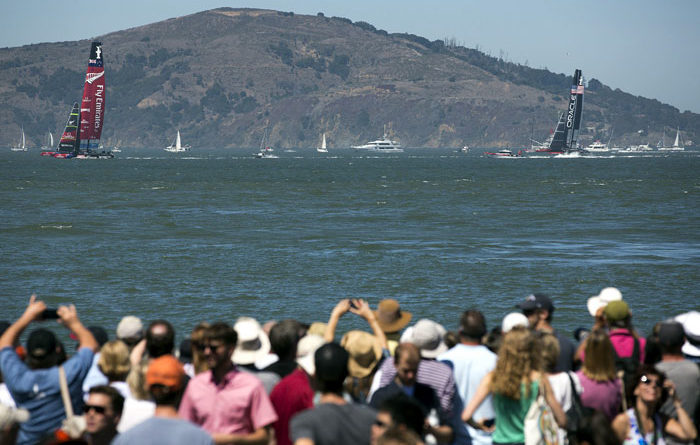 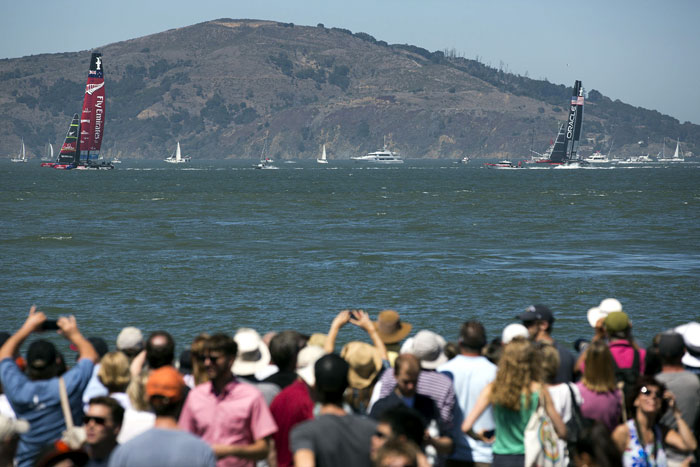 New Zealand came from behind at the start in Race 6 to cross the finish line 47 seconds ahead of Oracle Team USA. In Race 7, the Kiwis were ahead from the start and steadily increased their lead until they won the race by 1 minute, 6 seconds.

With their two race victories, the Kiwi’s need only 3 more wins — for a total of 9 — to claim the oldest trophy in international sports for the Royal New Zealand Yacht Squadron.

Because Oracle Team USA was docked two points before the contest even started, for breaking the rules in the warm-up regatta, the U.S. defender must win 10 more races — for a total of 11 — to retain the Cup.

Only one race was held Sept. 10 because defender Oracle Team USA used its one and only postponement card after the Kiwis won Race 5, the first race of the day, by 1 minute, 5 seconds.

Oracle Team USA had led on the first two legs of Race 5 and then called for a foiling tack — a radical, quick turn around the downwind mark. Something went wrong, and the boat practically came to a stop. Oracle went from a lead of about 459 feet to trailing 984 feet halfway up the beat toward the Golden Gate Bridge.

Before the start of Race 6, Oracle requested the race be postponed until Sept. 12.

Both teams are allowed one postponement card and may use it only to postpone a day’s second race, regardless of the reason. Oracle Team USA skipper Jimmy Spithill said it was a collective decision by the onboard crew to request a postponement.

After announcing the postponement Spithill said, “We need to go back and regroup. We feel they have an edge on us at the moment, especially upwind. We need to do a bit of work here, and we’re going to play the card strategically and hopefully improve in time for the next race.”

Racing is scheduled to resume again Saturday, Sept. 14 — with races 8 and 9 scheduled at 1:15 p.m. PDT and 2:15 PDT. The races are scheduled to be broadcast live on the NBC Sports Network.

Two races, Races 10 and 11, are scheduled Sunday Sept. 15 — and, if needed, additional races can be scheduled through Sept. 21.