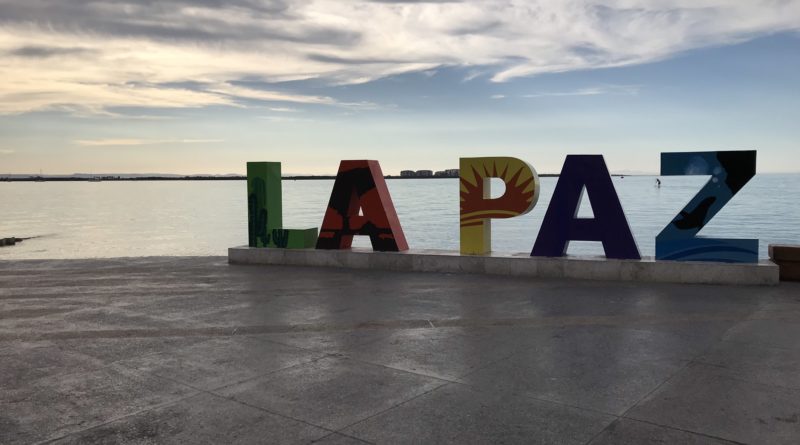 LA PAZ, Mexico — Two things might come to mind whenever La Paz is mentioned in any given conversation. Some will acknowledge the word as Spanish for “peace.” Others might ask if you’re talking about Bolivia’s capitol city. Both responses would certainly be correct – though Bolivia’s capitol city is officially named Nuestro Senora de La Paz.

The city of La Paz is also the seat of government for Mexico’s Baja California Sur. Few, however, trek down to the bottom of the world’s third-largest peninsula to watch the Baja California Sur government in action. Baja California Sur’s capitol city, which has one of the largest Chinese populations in Mexico, was a draw for British royalty, thanks to a visit by Queen Elizabeth. Pay attention to the many statues dotting La Paz’s urban waterfront – you might just find a symbolic marker of the queen’s visit.

Another grand piece of public art on the La Paz Malecón is an opened oyster holding a large pearl inside. The sculpture represents La Paz’s once-famed oyster market (see this issue’s Fast Facts on page XX).

Most people within Mexico head to La Paz for some R-and-R. The city is known for its relaxed pace. Sure there is plenty to do in town – five-star restaurants, markets hosted by local artisans, buildings with dramatic or historic architecture and a handful of museums to peruse. Yet it is the city’s picturesque beaches, full-service resorts and bountiful recreational opportunities that draw most people to La Paz.

Baja California Sur’s capitol city is, just the same, quite the ideal draw for anglers, boaters, divers, outdoorsy types and seafood lovers. It is not uncommon to board your boat at 6 a.m. on a Saturday morning, pick up some bait an hour later, spend a few hours fishing for marlin or yellowfin, and then returning to shore by 6 p.m., just in time to head out to the Malecón for a night out on the town.

Boaters will certainly be drawn to the handful of marinas in town, including Marina CostaBaja, Marina Cortez and Marina La Paz.

Other days in town are spent snorkeling with sea lions, (seasonally) diving with whale sharks, hiking Isla Espiritu Santo, jet skiing in La Paz’s bay or sunbathing at any of the remote beaches located just outside the city. El Bajo, a marine sanctuary, is a popular destination for divers.

Those seeking charm and character will find quite a bit of both at Bandido’s, where the hood of a classic truck was transformed into a grill. The restaurant is famous for its burgers and ribs, both prepared on the hood grill.

Seafood lovers will want to visit Bismarck or Bismarck-cito, which is known for its lobster tacos and salsa bar.

Claro Fish Jr., is known for its tacos and shrimp empenandas.

Marina CostaBaja, located a few minutes outside La Paz, is the standard bearer for boaters seeking a place to dock, dine and rest. The marina itself accommodates everything from the everyday sportfisher and small dinghy to the large mega- or super-yacht. Immediately surrounding the marina are tour operator offices, a local market and restaurants serving Japanese and Italian fare. (Note: There are a handful of sushi restaurants in La Paz. Be sure to specify whether you want Japanese-style sushi; ordering sushi without specific instructions means you will be served La Paz’s local spin on the popular seafood delicacy.)

Trek a few hundred feet from the marina and you’ll be on the grounds of Marina CostaBaja’s hotel campus (Hotel La Paz – Costa Baja), which includes dozens of five-star rooms, poolside bar, workout facility and a restaurant named after John Steinbeck. (Wine lovers will certainly enjoy the restaurant’s bottled collection.)

Adjacent to the hotel is a private club and beach, where some can take in the Sea of Cortez coast and grand views of La Paz. El Cortes Gary Player Signature Golf Club is a quick trek across the highway for those who want to hit the links. The gold course offers breathtaking views of the city and bay.

Those fancying a trip into town and a few hours away from the boat should reach out to Eduardo Gòmez Duran, manager of Eduardo’s Tours and Ground Transportation. Duran, a lifelong resident of La Paz, knows the city in-and-out. He can personalize your visit while giving you detailed history of La Paz’s rich past. Visit eduardostours.com or email eduardostours@hotmail.com.

Other tour operators at Marina CostaBaja – Baja Adventures Co. and Dream Yachts, for example – offer trips to Isla Espirito Santo and other places to snorkel or dive.

La Paz is served by an international airport, which services many cities within Mexico. Those seeking to fly into La Paz can choose a nonstop, two-hour flight out of Tijuana. Those flying from Los Angeles or San Diego can travel directly to Cabo San Lucas and then drive two hours northeast into La Paz. (There are no direct flights from Los Angeles or San Diego to La Paz.)

Baja California Sur’s city of pearls, when all is considered, is truly deserving of its name: La Paz is a place where you will find peace.