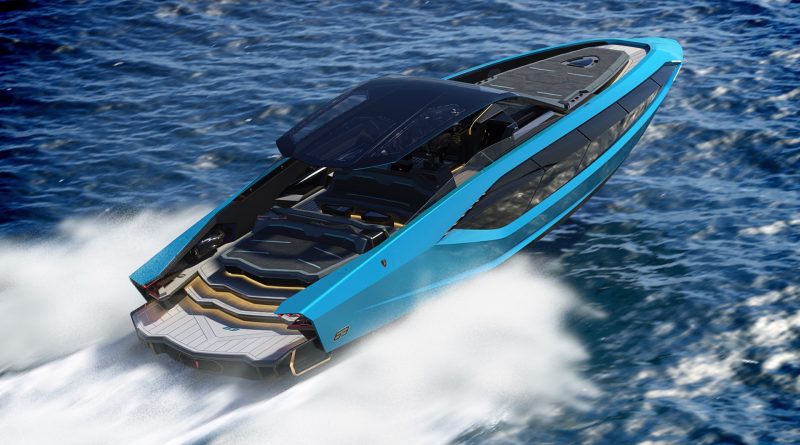 ‘Tecnomar for Lamborghini 63’ is the result of a joint project between the automaker and yacht maker. Inspired by the Lamborghini Sián FKP 37 hypercar, the new limited-edition yacht is named for Lamborghini’s 1963 founding year, according to a company press release.

“This yacht represents the significance of creating a valuable partnership, at its best: our co-operation allows the essence of both organizations’ style and expertise to be transferred to different worlds, sharing in their diversity to interpret and add value to the final product in a new environment,” Stefano Domenicali, Chairman and CEO of Automobili Lamborghini said in a released statement. “If I had to imagine a Lamborghini on water, this would be my vision. I’m delighted to celebrate this successful collaboration.”

The Tecnomar’s carbon-fiber construction makes it so that the yacht is in the “ultra-lightweight” boat classification. It weighs 24 tons, is 63 feet long, and powered by two V12 engines, each making 2,000 horsepower. The yacht’s top speed is 60 knots, which translates to 69 mph on land; the cruising speed in 47 mph.

According to a press release, the exterior design is characterized by a super sportive silhouette, with a cutting-edge but thoroughly nautical appearance. The hull and the superstructure are created from a high-performance shell, developed by naval engineers specializing in hydrodynamic sciences. They interpreted the design lines, created by Marcello Gandini in the Miura and the Countach of the 60s and 70s, in a contemporary way, the press release stated.

The yacht is priced at 3 million Euros, or approximately $3.4 million. In keeping with the 63 theme, that is the number of yachts they plan to build. The boats will be available at the beginning of 2021.