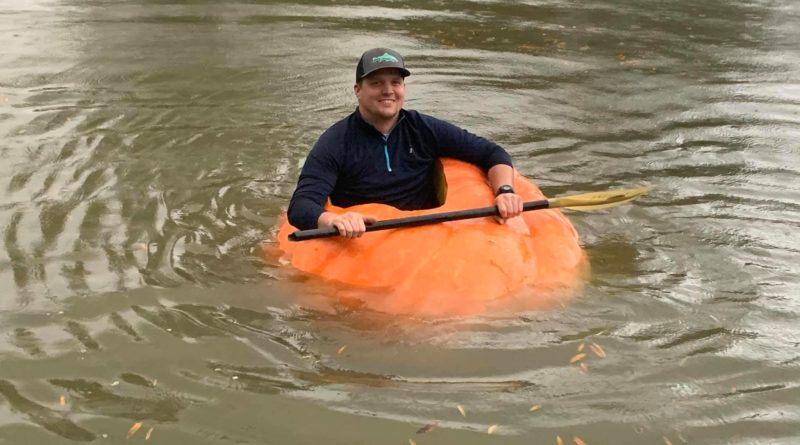 CLEVELAND, Tennessee―Pumpkins – you can eat them, dress like them, decorate with them and turns out, even use them as a boat. A Tennessee man is wowing the internet with his one-man pumpkin regatta. Justin Ownby, a farmer from Cleveland, Tennessee, broke a personal record, growing a 910-pound pumpkin this year. After weighing it, he hallowed out that massive pumpkin, tossed it into a pond, climbed inside and took it for a spin. His wife, Christin, posted a video to Facebook showing her husband attempting to paddle around the pond inside the giant crop. The video has since garnered more than 280,000 views. The video can be found at bit.ly/2Pw3oEe.

Christin told CNN the crop was grown from a seed from last year’s all-state champion pumpkin, which weighed more than 1,700 pounds. She said before this year’s giant pumpkin, the largest one her husband had ever grown was 220 pounds. Christin also told CNN their pumpkin would have placed second at the local fair but they were unable to attend because of a family trip. Ownby told news outlets he plans to grow another one next year, hoping it will be even bigger. Christin told CNN he is hoping to break the 1,000-pound mark. It’s unclear if he plans to also turn that pumpkin into a boat as well, or if he has other plans for his next pumpkin.

Turns out, pumpkin boat racing isn’t all that uncommon and is even an annual fall event in some cities. Pumpkin regattas were held this October at Tualatin Lake in Oregon, Damariscotta, Maine and Morton, Illinois, among others.