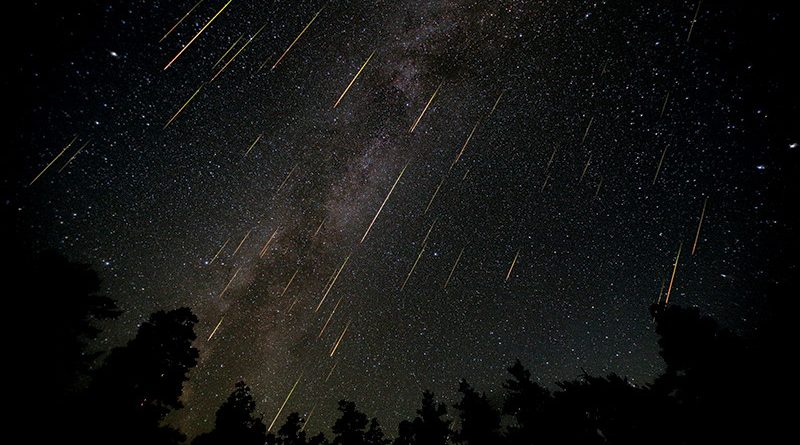 Two different meteor showers will be streaking their way across the skies throughout the end of July well into August.

Meteor showers, which are named for the constellations where they appear according to the NASA website, happen when the Earth passes through the trail of debris left by a comet or asteroid. The meteors themselves are bits of rock and ice ejected from comets, then when they burn up, they leave bright streaks across the sky gaining the nickname shooting stars or falling stars.

“Perseid meteors are produced by particles shed by comet 109P/Swift-Tuttle,” according to the Griffith Observatory website. “They hit our atmosphere at 37 miles (59 kilometers) per second.”

Griffith expects 83 meteors per hour and said that the moon sets just as the meteors will start to appear meaning there will be great viewing conditions for this shower.

The Perseid’s meteor shower will radiate from a point in the constellation of Perseus the Hero. Perseus’s constellation is in the northern sky next to Andromeda and represents the Greek hero Perseus who defeated Medusa and rescued the princess, Andromeda. The legend says they lie next to each other in the night sky.

“South Delta Aquariid meteors may be produced by particles shed by a sun-grazing comet,” according to the Griffith Observatory website. “They strike our atmosphere at 25 miles (41 kilometers) per second. The radiant of the shower is in the constellation Aquarius the Water Carrier, found in the southern sky after midnight.”

There are an expected 12 meteors per hour and due to bright moonlight, there will be interference with the observations.

The Delta Aquariid meteors seem to radiate from a point near the front of the constellation Aquarius the Water Bearer, and favors the Southern Hemisphere but can sometimes be visible from the Northern Hemisphere.

Aquarius is one of the 12 zodiac constellations and throughout history and across cultures has been associated with water.

In Greek mythology, Aquarius is associated with their tale of the great flood, which parallels the Old Testament, and in ancient Egypt, the constellation represents Hapi, God of the Nile, according to the EarthSky website.

Bill Cooke, the lead for the Meteoroid Environment Office at NASA’s Marshall Space Flight Center in Huntsville, Alabama, gave some meteor shower watching tips in an April 13 article with Space.com.

Basically, it is narrowed down to getting as far away from light pollution as possible; give your eyes 30-45 minutes to adjust to the dark night sky; leave your phone inside; and lay flat on your back to take in as much of the night sky as possible.

“You do not want to look at the radiant,” Cooke said in the article. “A good philosophy is to lie on your back and look straight up. And that way, you take in as much of the sky as you can.”

For more information on the meteors falling in 2021 and 2022 see the Griffith Observatory website at https://griffithobservatory.org/explore/observing-the-sky/whats-in-the-sky/meteors/