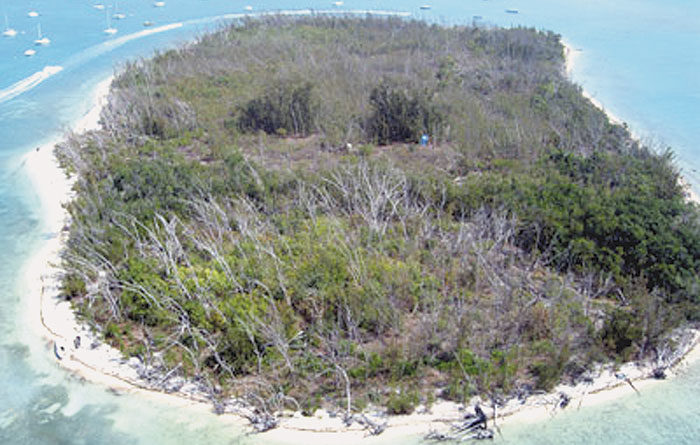 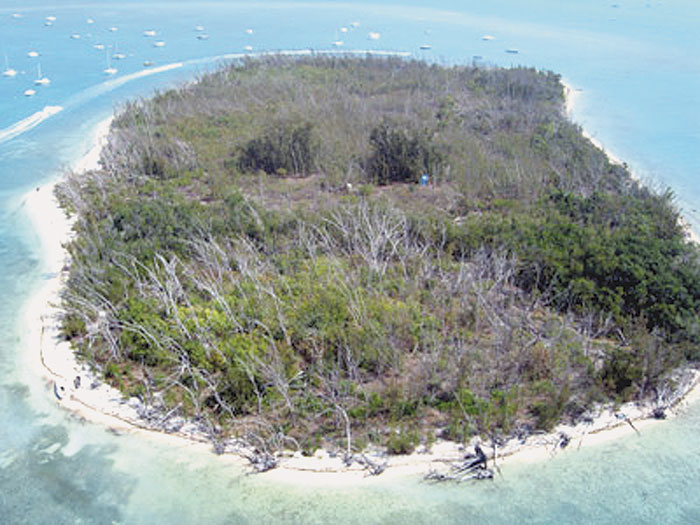 And if you thought the fictional island on the 1960s television show harbored a quirky assortment of characters, get a load of the ones who’ve figured in Wisteria Island history:

There was Key West luxury developer Pritam Singh, who lived on the rent-free paradise as a hippie.

There were the pot-smokers, partiers, poets and picnickers — as well as artists, vagrants and nature-seekers — who used it to get away from civilization for hours, days or even weeks at a time.

Navy SEALs trained for secret missions on its terrain. Thieves used it, too, as a chop shop for stolen outboard motors.

And don’t forget Dennis Walsh, a guy who sold dirty jokes for $1 to tourists on Duval Street and enjoyed walking his dog on the island’s beach.

Over the past four decades, it seems like just about everyone has used the island except its acknowledged owners: the Bernsteins, a well-to-do family with New York roots who developed most of nearby Stock Island. “We kind of ignored it,” Roger Bernstein said.

But in 2007, Bernstein and his brother, Jordan, decided it was time to turn their “trophy property” into a luxury resort. Those who loved the scruffy island — created during a Navy channel-dredging project around the turn of the last century — had other ideas.

Among them were Naja and Arnaud Girard, who own a Key West marine assistance and boat salvage company. The couple have fond memories of their two children playing on the island with kids from other liveaboard families, who grew up on boats anchored off its shore.

The Girards started poking around Washington, D.C. archives and online databases, trying to find a way to keep at least some of the island undeveloped. They hit the jackpot: documents that suggested the Bernsteins could not own the island because the Navy had not given up title to Wisteria until 1982. And, when it did, it transferred it to the U.S. Department of the Interior, not the state of Florida.

“This came out of nowhere,” said Barry Richard, an attorney with Greenberg Traurig, which is representing the Bernsteins. “I have to say, it came out of a relatively low administrative level … and may well be, at some point, reversed administratively. But it is not a risk we can take.”

As a result, Key West’s local drama has turned into a federal case: F.E.B. Corp. vs. the United States of America.

The ownership controversy prompted the Monroe County property appraiser to slash the island’s valuation to $17,900 (it once was $700,000), and it has brought to a halt the Bernsteins’ effort to turn Wisteria into a resort that mirrors its twin island, Sunset Key.

The Bernstein brothers are shocked that the feds are disregarding the warranty deed their late father, Ben, obtained for $155,000 in 1967, the four decades worth of property taxes they’ve paid and the Submerged Lands Act of 1953, which they believe confirms their ownership.

“This is a land grab by the federal government of epic proportions,” Roger Bernstein said.

But according to Naja Girard, the “real land grab” occurred in 1951, when the state auctioned off the island. She dug up documents that showed the Navy claimed ownership at the time and objected to the auction. The state went ahead anyway.             The winning bid was $2,769 by Paul Sawyer, acting as an agent for longtime State Rep. Bernie C. Papy Sr., known as the “King of the Keys.” He took over the warranty deed for $6,100 in early 1952.

“The honorable Papy knew everyone,” Naja Girard said. “And he knew the Navy was planning on putting a fuel depot with tanks on Wisteria Island.”

The Navy didn’t end up needing Wisteria, but Papy still made a nice profit. He sold Wisteria in 1956 for $115,500 to Connecticut businessman Amaryk Aldo. Six years later, it changed hands again, purchased by a mystery group of six men known as Wisteria Island Inc. They, too, did nothing with the island, finally agreeing to sell it for $160,000 to Key West native David Wolkowsky and his partner, Clayton Partin.

“We had big, big plans,” said Wolkowsky, now 93. They hired the New York firm that designed the Lincoln Center. It came up with a luxury complex that was eye-popping at the time: 60 homes, a yacht club and a golf course.

Wolkowsky said he borrowed $20,000 from Ben Bernstein to complete the sale. But when he asked for an extension to repay the loan, Bernstein would not give it to him and instead took over the purchase agreement in 1967. “I never knew there was any problem with the title,” Wolkowsky said.

Ben Bernstein had considered creating a houseboat row on the island, but he died in 1973. His widow, Miriam, took over the family enterprises with the help of her two sons.

“Rumor had it that Old Lady Bernstein didn’t care if anybody was out there and didn’t want the island developed,” said Cliff Hartman, a palm-frond weaver who once lived on the island. “She wanted it to be a sanctuary for hermit crabs and butterflies.”

Not so, said Roger Bernstein. Over the years, the family entertained ideas for a campground and other projects, but none seemed right.

The Bernsteins fought the island’s residential-conservation zoning, which allows only one house per 10 acres.

“It’s not a pristine tropical island: There’s garbage trees on there and garbage bushes,” Roger Bernstein said. (The invasive Australian pines that dominate the landscape, along with Brazilian peppers, led to its nickname, Christmas Tree Island.)             Bernstein argued that the island had become an illegal dump and a haven for criminals. Last year, he hired 17 workers to haul away the tons of garbage and debris. The cleanup took three weeks and required more than 100 boat trips.

“You wouldn’t believe the stuff we got off that island,” said Jim Vernon, who helped. The list included a gorilla mask, a rusted knight-in-shining-armor outfit, musical instruments and a vacuum cleaner.

The Bernsteins’ F.E.B. Corp. filed suit against the United States in August, arguing that the federal government ceded ownership of the submerged bay bottom on which the island was later built when Florida was admitted to the Union in 1845. Even the U.S. Navy thought the Bernsteins owned the island in 2005 and 2006, their lawyers say, when it entered into license agreements to use the property for Navy SEAL training.

But the Bureau of Land Management determined the Navy owned the land at the time of the first private sale, with documents that include a 1924 executive order in which President Calvin Coolidge reserved the island for naval purposes. The feds also cited a 1928 lease the Navy entered into with Lowe Fish Co. for a shark-skinning operation on the island.

Roger Bernstein said the feds have no current need for the island, while he wants to build something the community can be proud of — just as the family did on nearby blue-collar Stock Island: affordable housing, a working waterfront for fishermen and Bernstein Park, which the county had eyed for a jail.

The proposed Wisteria Island development would generate jobs and growth, yield tax revenue and require no city services, Bernstein said. “How many cities would say no to that?”

But in a tight community like Key West, Arnaud Girard said there should be some “give and take.”

Bernstein said he has tried to work with the community, proposing a facility to service the nearby liveaboard boaters. It would offer a store, a dog park, dinghy docks, laundry facilities, a pumpout station and ferry service, he said, for just $300 per month.             Last month, the U.S. Attorney’s Office in Miami filed a motion to dismiss F.E.B. Corp.’s lawsuit, arguing that the statutory window for such a claim closed more than 50 years ago.

F.E.B. Corp. responded that the United States had never acquired title to the island.

“So, if the federal government grabs it and no federal agency wants to use it, the island will go to public auction,” Bernstein said.