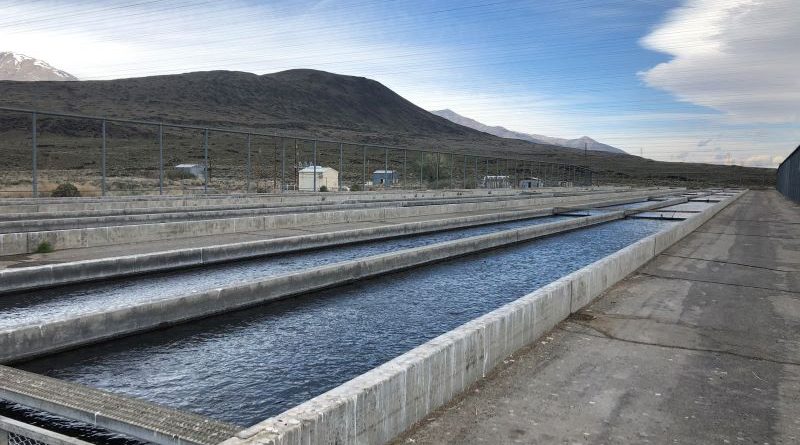 On April 21, the California Department of Fish and Wildlife (CDFW) announced two fish hatchery facilities in eastern Sierra have recently detected an outbreak of Lactococcus petauri. Lactococcus spp., a naturally occurring bacteria, is similar to Streptococcus spp. The bacterium has caused disease in freshwater and saltwater aquaculture facilities worldwide, although 2020 was the first time it was detected in California. Lactococcus spp. can cause a blood-borne illness with symptoms including anorexia, bulging eyes with hemorrhaging around the edges, lethargic or erratic swimming, darkening of the skin, swollen abdomens, and increased mortality. Infected fish may also show no signs of infection depending on several factors, including water temperature and stress.

The affected facilities – Black Rock Hatchery and Fish Springs Hatchery – usually provide fish for stocking waterways in CDFW’s Inland Deserts Region. Unfortunately, both facilities experienced a similar outbreak of Lactococcus garvieae in 2020, which led to the euthanasia of approximately 3.2 million fish to stop the spread of the disease.

The four raceways that hold catchable fish at Black Rock Hatchery tested positive for the Lactococcus bacteria earlier in April. This accounts for approximately 120,000 trout, generally stocked throughout the fishing season. At Fish Springs Hatchery, all lots of catchable fish (about 550,000 trout) tested positive. The current outbreak is among fish that have already received one round of vaccination.

“This is unfortunate timing, as it affects our planting efforts in the weeks before the opener, but all is not lost,” said CDFW Director Charlton H. Bonham in the April 21 press release. “Fortunately, we learned much from the 2020 outbreak, and we have more knowledge and better tools to fight the bacterium this time around. We also believe we can continue stocking, with some adjustments and careful monitoring.”

Before the 2020 outbreak of Lactococcus, which is similar to streptococcus, the bacterium had never been detected in California fish, and there were no known effective treatments to employ. The CDFW put three facilities under quarantine for more than a month while pathologists and hatchery staff treated the affected fish. The CDFW successfully developed vaccines and continues to work on vaccine-related issues to improve efficiency.

Lactococcus spp. occurs naturally in the environment and is usually spread by the movement of fish or eggs. However, the CDFW’s fish pathologists believe that it may have been carried into the hatcheries by birds that picked it up from an environmental source. The current strain of bacteria is identical to one found in fish farms in central Mexico, which supports the hypothesis that birds using the pacific flyway are the likely vector for the spread of the bacteria. Fish infected with the bacterium can show symptoms such as bulging eyes, lethargic or erratic swimming, and increased mortality, or be asymptomatic and show no signs of infection depending on several factors, including water temperature and stress.

Fish-to-human transmission of this bacteria is rare and unlikely. However, anglers should always follow USDA recommendations on cooking fish to an internal temperature of 145 degrees F.

The CDFW has initiated a phased priority stocking plan for the eastern Sierra. This plan will focus on planting high-use waters in southern Mono and northern Inyo counties. Like measures taken to handle the 2020 outbreak, the CDFW will investigate all available options to secure additional fish for increased planting opportunities, including redirecting fish plants from non-infected hatcheries. For example, results of the latest testing at Hot Creek Hatchery indicate that the fish in that facility’s upper raceways are cleared for planting at this time.