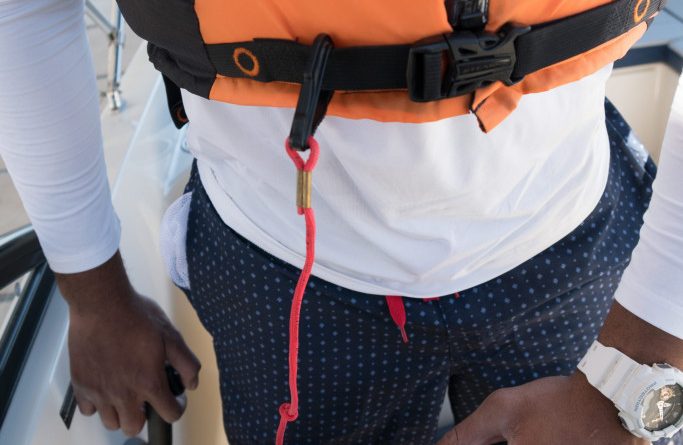 All recreational vessel operators are now required to use engine cutoff devices on certain vessels less than 26-feet when traveling on a plane or above displacement speed.

“This is probably one of the larger boating safety legislation to hit recreational boating in a while,” said Scott Croft, vice president of public affairs for the Boat Owners Association of The United States (BoatUS).

These devices, commonly referred to as engine cutoff switches (ECOS), are designed to prevent a boat-strike injury if an operator is accidentally ejected overboard while underway. Engine cutoff devices can be located at the helm of the boat or on the tiller or body of an outboard engine and typically connect a boat’s operator to the cutoff switch with a lanyard. Some ECOS devices eliminate the lanyard and rely on wireless proximity devices to shut down an engine if the operator goes overboard.

“They all turn off the engine so the boat doesn’t start to death spiral around you in the water,” said Croft.

The new law requires a vessel operator to use either a helm, outboard lanyard, or wireless ECOS on certain vessels less than 26-feet when traveling on plane or above displacement speed. For a boat, “on plane” means the point in which the boat, in effect, rides over its bow wave, reducing the wetted area of the hull and thus reducing drag.

These vessels include boats that have a functioning engine cutoff device installed at the helm, on an outboard engine,  have wireless ECOS, or boats manufactured beginning January 2020.

BoatUS said the Coast Guard increased the number of boats required to have ECOS installed after this date in an effort to reduce boating accidents and fatalities.

Exceptions to the ECOS requirement include if the main helm of the vessel is in an enclosed cabin or the vessel is not operating on plane or at displacement speed. Low-speed activities such as fishing or docking do not require the use of an ECOS. The vessel operator is also exempt if the boat’s motor produces less than 115-pounds of static thrust – or about the size of a 2-hp engine.

“All the normal things you do at a low speed don’t really change, what does change is again, if you’re going fast on a small boat under 26-feet,” said Croft.

As this is a federal law, states do not have the ability to enforce the regulation. However, seven states, Alabama, Arkansas, Illinois, Louisiana, Nevada, New Jersey, and Texas, currently have their own ECOS laws. BoatUS expects most states to amend their regulations to match federal law over the coming years.

“This is really a way, a smoother way to get the states to embrace engine cutoff switches in a more efficient manner, in a more uniform manner,” said Croft.

While boat operators who fail to follow the new requirement could face a $100 civil penalty for the first offense, BoatUS expects the U.S. Coast Guard’s initial focus will be education.

“The Coast Guard’s not looking to write everybody up right away,” said Croft. “They really want to educate.”

There are many different scenarios as many different boats with different builds exist, boaters with questions can visit uscgboating.org/recreational-boaters/engine-cut-off-switch-faq.php for frequently asked questions.