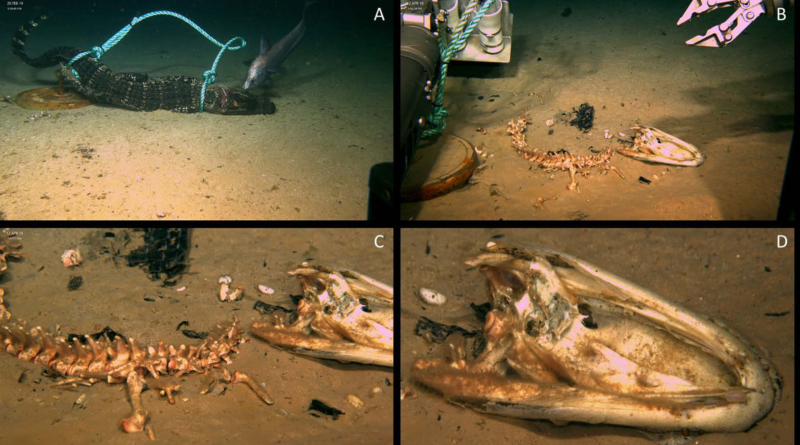 GULF OF MEXICO—A recently published scientific study has revealed a new eerie creature prowling the ocean depths in the Gulf of Mexico.

The research article “Alligators in the abyss: The first experimental reptilian food fall in the deep ocean,” published in December in the online journal PLOS ONE, revealed a newly discovered species of bone-eating worm.

The experiment involved strapping a trio of dead alligators to the seafloor, about 1.2 miles below the surface in the Gulf of Mexico. The goal was to learn more about scavengers and predators that prowled primeval seas and to see what sort of hungry seafloor-dwellers might crawl over or make a meal of the unusual food source now.

According to the research article, alligator two was eaten all the way down to its cranium and spinal column after just 51 days. The culprit? A complete DNA analysis revealed it to be a newly discovered species of bone-eating worm part of the Osedax genus. This represents the only occasion where any Osedax specimen has been seen in the Gulf of Mexico and the first time this exact species has ever been observed, according to findings.

“This is the first published report of Osedax exploiting the bones of Crocodilia, though three species (O. knutei, O. ryderi, and O. talkovici) have been recovered from green turtle bones deployed off California,” the article stated.

A camera-equipped robot found alligator one was ravaged by football-sized, pink pill-bug crustaceans (Bathynomus giganteus) within 24 hours, and gradually devoured from the inside out. The large seafloor pill bugs are related to roly-poly bugs seen on land.

Mystery surrounds the fate of alligator three, which was ripped from its weighted harness and carried away as a midnight snack by some unknown predator. Researchers hypothesized a shark was the likeliest culprit.