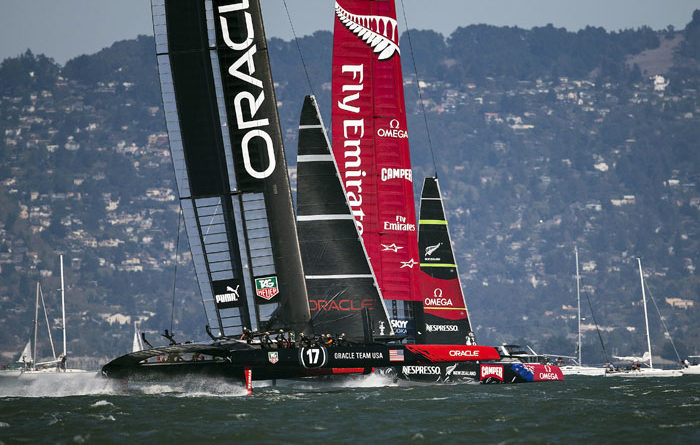 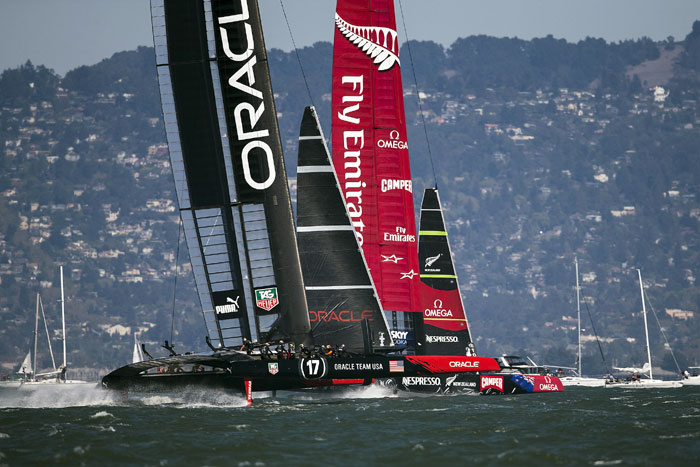 SAN FRANCISCO (LOG NEWS SERVICE) — After the second race Sept. 15 — in Day 6 of the 34th America’s Cup series — Emirates Team New Zealand led on the scoreboard 7-1, with defending Oracle Team USA having won a total of three races to date.

The Kiwis need only two more wins to claim the Auld Mug for the second time in 18 years. Oracle Team USA, owned by software billionaire Larry Ellison, needs eight more wins to keep the Cup for the United States.

In Race 8 on Sept. 14 — Day 5 of the series — the normally spot-on Kiwis rushed a tack during a close-quarters duel with defending champion Oracle Team USA and couldn’t get their massive 131-foot-high wing sail to pop through to the correct side. The big black-and-red cat began to capsize, its starboard hull rising high into the air.

The Kiwis kept grinding and got the wing to pop the right way. The boat paused and then the airborne hull splashed down, to the relief of both crews. Oracle Team USA skipper Jimmy Spithill skillfully steered clear of the Kiwi boat and sailed on to a 52-second victory, his second of the series.

Race 9, the second race scheduled for Sept. 14, was abandoned just as the boats turned onto the windward third leg with New Zealand in the lead, because the wind exceeded the 22.6-knot limit during a five-minute period. The race was rescheduled for Sept. 15.

Oracle Team USA, in a wire-to-wire victory Sept. 15, won Race 9 by 47 seconds and put the team’s first point on the scoreboard. Oracle had to overcome a two-point penalty imposed by the International Jury in the biggest cheating scandal in the 162-year-history of the America’s Cup.

If the Kiwis do not wrap up the series with nine wins on Sept. 17, racing is scheduled to continue Wednesday, Sept. 18.