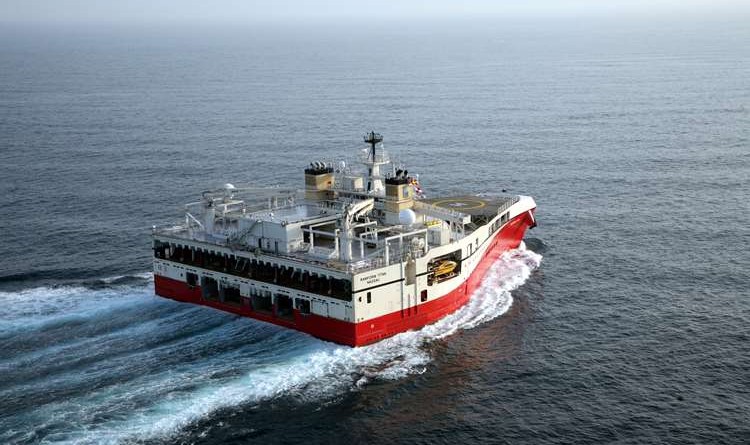 At first glance, it looks as if it is only half a ship. However, don’t let the image fool you. That is the ship in its entirety, and it is one of the widest ships ever built. The ship, named Ramform Titan, is owned by Petroleum Geo-Services (PGS).

Some refer to Ramform as the “world’s ugliest ship” because of its odd appearance. The unusual shape is necessary as it is a seismic ship. This triangle-shaped vessel is 70 meters (nearly 230-feet wide). The width is needed for stability reasons to collect seismic data.

This research vessel was built at Mitsubishi in Japan. It was first launched from Japan to Norway in April 2013.

Ramform, with a 24-streamer reel capacity, has the ability to pull 221 tons and can go 120 days without refueling.

Being owned by a Norwegian company, the ship not surprisingly features a sauna onboard. A fitness room, swimming pool, two-ball court, three lounges with televisions and an auditorium are the other amenities for an 80-member crew aboard the vessel.

Since the inception of the Ramform vessel, there have been other prototypes. The next Titan-class ship, Ramform Hyperion, is due to be launched this year.

Ramform Titan is still actively underway towing 16 cables in Gulf of Guinea at the time of this report. Voyage information and activity can be tracked online.