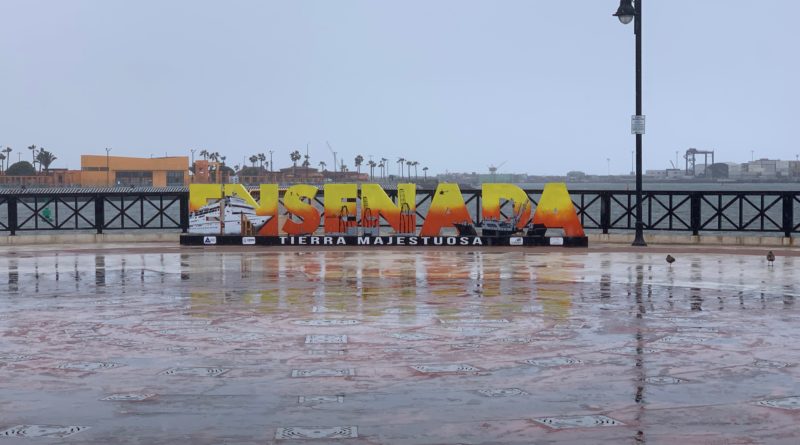 Ensenada is the first port city for U.S. boaters navigating into Mexico. One of the places to dock is at Ensenada Harbor, which is also where cruise ships and commercial shipping interests make port. (Parimal M. Rohit photo)

Dock your boat and explore a city ripe with culinary treats and fermented grapes.

ENSENADA, Baja California—The thrill of competitive sailing and the pleasure of recreational cruising were on full display during the final weekend of April at Hotel Coral and Marina. Hundreds of boaters and sailors were mingling with each other over breakfast on April 28, the morning after dozens of sailboats raced down the Pacific Ocean as part of the Newport-to-Ensenada International Yacht Race. Socializing turned to celebrating as awards were handed out to the race’s best performers. One by one, teams of boaters started filtering out of the pool area and into the lobby. Many would grab a shuttle, taxi or bus to the U.S.-Mexico border in Tijuana (Ensenada does not have a commercial airport), but some stayed back for a little bit more.

A few stragglers took the hotel shuttle into downtown and probably enjoyed food and drinks. Others rented vans and trekked east into Guadalupe Valley – locally known as Mexico’s Napa Valley – and sampled some wines. Some remained at the Coral, enjoying the views of Bahia Todos Santos from their balcony or spending a little time on the docks. There was probably some good fishing to be had for those who wanted to drop a line in the bay/ocean.

This is Ensenada – a perfect getaway for Southern California boaters who want to cruise internationally without being far from home.

Hotel Coral & Marina might just be the gold standard of Ensenada lodging, whether or not you are a boater. It’s not uncommon to see weddings or other large gatherings held at this picturesque hotel, which offers great views of Bahia Todos Santos.

Each room is a suite, equipped with bedroom, bathroom, common room and balcony. The balcony offers pool, ocean and marina views. Several amenities are offered at the hotel, including on-site restaurants, spa, indoor pool and gym. A courtesy shuttle to downtown Ensenada is available.

The marina, naturally, is walking distance to the hotel and featured 350 boat slips. A fuel dock and launch ramp are on site; other amenities include electricity, laundry, restrooms, security, showers and repair/service packages.

Marina staff can help boaters with insurance, permits, registration and other paperwork (see the “Paperwork” section below).

Southern California’s wine lovers who don’t want to trek up to Sonoma or Napa and want to experience something different from the Temecula Valley should definitely visit Ensenada’s district of fermented grapes (if you haven’t already, that is). Peaceful and rustic are two words to best describe the overall mood of El Valle de Guadalupe.

There are more than 150 wineries in Ensenada’s Guadalupe Valley, including El Cielo Winery, Hacienda Guadalupe, La Cetto, Trevista Vineyards, Vina de Frannes and Vinícola Tres Mujeres. Complementing the vineyards and wineries are several restaurants and boutique hotels. La Esperanza, for example, is located on the Ensenada-Tecate Highway and specializes in Baja Med cuisine (see next section for more on this food specialty). Also consider Corazon de Tierra (open for dinner only) and Finca Altozano.

“Baja Med” is a term you might hear tossed around a lot in these parts, as Ensenada is considered the unofficial capital of Baja California’s culinary delights. What is Baja Med? It is a catchall term for a fusion of Mexican, Mediterranean and Asian goods – specifically Cotija cheese, lemongrass, olive oil and pork rinds.

Seafood is often incorporated into Baja Med dishes – which makes sense, when you consider most of Baja California’s population lives on the coast and Ensenada is where the fish taco originated. Don’t be surprised if you see a tempura fish taco, for example.

There are other cuisines, of course, to enjoy in Ensenada. You do have your U.S. of A. imports, such as McDonald’s and Carl’s Jr., but you’ll also find a fair share of Chinese, Japanese, Korean BBQ and Brazilian restaurants in downtown and along Route 1, as well.

Those seeking upscale dining would enjoy Sano’s Steakhouse, which is located near Hotel Coral and features views of Bahia Todos Santos.

Ensenada, as noted above, does not have a commercial airport. There are two ways to get to Ensenada: car or boat.

Those who come by road would do so through Tijuana or Tecate. Be sure to bring your passport and any other related paperwork. Take the Tijuana-Ensenada Highway (Route 1), which is a toll road paralleling Baja California’s northwest coast. Route 1 is a toll road, so be sure to have some cash on hand if you are driving your own car. (A hired driver might have a transponder to pay the fee, which is between $1 and $2, per tollbooth; there are two tollbooths along the way.)

The drive from Tijuana to Ensenada is roughly 70 miles in distance.

Getting here by ocean, though, is probably the preferred option, at least for The Log’s readers – and there are marinas catering to boaters who arrive here in their respective vessels. Hotel Coral and Marina, located in the upper reaches of the Ensenada coast, is one of the first destinations in town.

Boaters can also head into Ensenada Harbor, which has a guest anchorage. Keep in mind the harbor is also home to cruise ships, shipping vessels and the Mexican Navy.

Are you cruising in and out of Mexico by boat? Be sure to have your paperwork in order. Much of what you need to do can be done in Ensenada, as the city is the first (or last, if you are leaving) Mexican port upon arriving from (or departing to) the United States.

The first thing to do is pay the required fees. This can be done by visiting the Mexican consulate’s website, which is www.banjecito.com.mx/registroEmbarques/. You’ll also need a passport number, name of the person who is in charge of the vessel and vessel documentation.

Be sure to create a passenger list. All passengers and crewmembers must be listed on the spreadsheet, which you will email to Mexico’s immigration officials. Visit www.inm.gob.mx for more information.

Everyone on board will also need to have his or her passport (or passport card) and completed FMM (Forma Migratoria Multipe). A valid registration or vessel documentation must also be on board.

Also required to be on board: a TIP (Temporary Import Permit). Failure to have a valid TIP means Mexican officials will consider the vessel to be within the country’s jurisdiction illegally. Boaters can obtain a TIP at the Mexican consulate (Los Angeles, Phoenix, Sacramento, San Bernardino) or at a Mexican port of entry (Ensenada, La Paz, etc.)

Holiday Inn just opened a new property in downtown Ensenada, adding to the list of places to stay when visiting the Baja California resort town. Ensenada’s newest hotel focuses on lodging, as there is no restaurant on the property. Other notable places to stay include a new City Express location on the northern edge of town, Las Rosas Hotel & Spa and San Nicolas Hotel & Casino.