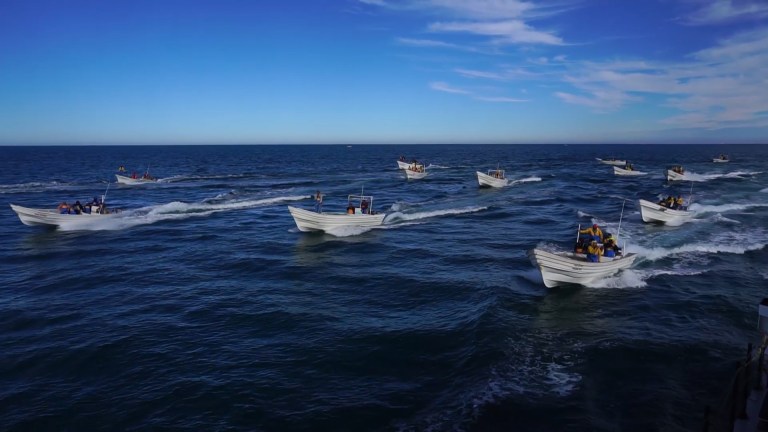 A group of skiffs on the upper Sea of Cortez reportedly attacked a Sea Shepherd vessel. The incident occurred within a vaquita habitat. (Sea Shepherd photo)

SEA OF CORTEZ—An attempt to patrol possible illegal fishing activities in the upper stretches of the Sea of Cortez turned into a tense standoff involving poachers, nonprofit marine conservationists and the Mexican Navy, on Jan. 9.

The incident started during the morning of Jan. 9, when the Sea Shepherd vessel M/V Farley Mowat reportedly recovered three drift gillnets during a maritime patrol within the Sea of Cortez’s vaquita refuge. Drift gillnets have been used to catch totoaba, a highly prized fish found off the Baja California coast.

Catching totoabas via drift gillnet has, however, been cited as the reason why the vaquita porpoise is on the verge of extinction. Vaquitas have been a common bycatch within the local commercial fishing practice of catching totoaba by drift gillnet. Any vaquita caught by a drift gillnet has not been able to survive. There are now fewer than 30 vaquitas remaining in the world and the United States, as a response to the vaquita’s endangered species status, implemented a seafood import ban on any Mexican fisheries using drift gillnets within the Upper Sea of Cortez (or Gulf of California, as it’s also known).

Farley Mowat’s crew, after spotting the three drift gillnets, reportedly witnessed at least 35 skiffs, with poachers aboard, within the vaquita refuge.

The ship, according to Sea Shepherd staff, “approached the skiffs where obvious illegal poaching was taking place, as totoaba fishing gear was detected being loaded into a skiff.”

“At this point, one of the skiffs began circling the Sea Shepherd vessel which was soon joined by the remainder of other skiffs,” Sea Shepherd staff continued in explaining the confrontation between Farley Mowat crew and the poachers.

The circling quickly escalated into an ambush, according to a Sea Shepherd statement on the incident.

“M/V Farley Mowat was ambushed and overwhelmed by more than 35 skiffs, many containing gillnets. The poachers attacked by hurling lead weights, anchors, trash, dead fish and even Tabasco sauce at the vessel and its wheelhouse windows in addition to threatening ship’s crew with Molotov cocktails, spraying gasoline at the ship and pouring gas in the sea around the vessel,” Sea Shepherd staff stated about the incident. “Poachers then dropped an illegal gillnet in front of the bow of the moving Sea Shepherd vessel in an attempt to foul the ship’s propellers. Five agitated poachers illegally boarded the M/V Farley Mowat and looted multiple objects from the vessel’s deck while it was temporarily immobilized.”

Crew aboard Farley Mowat reportedly held the poachers who attempted boarded the ship with an emergency fire hose. The crew was able to keep the poachers off until a helicopter deployed by the Mexican Navy arrived on scene and made several passes over the area.

The alleged poachers reportedly fled the scene at this moment. Farley Mowat’s crew, with the help of the Navy sailors and Gendarmeria (a division of Mexican Federal Police) restarted the ship and navigated to San Felipe.

Sea Shepherd has maintained a presence in the Upper Sea of Cortez/Gulf of California since 2015, when it launched Operation Milagro. The operation was launched specifically to help protect the vaquita from illegal totoaba gillnet fishing.

“The totoaba fish is another endemic endangered species to the Gulf of California and it is poached for the trade of its swim bladder in Asian black markets,” Sea Shepherd staff said in a released statement. “Totoaba bladders are known as ‘aquatic cocaine’ due to their high value. It is believed that a totoaba bladder can be worth up to $100,000.”

More than 780 pieces of illegal fishing gear has been collected in and around the vaquita habitat by Sea Shepherd, the nonprofit’s staff stated.