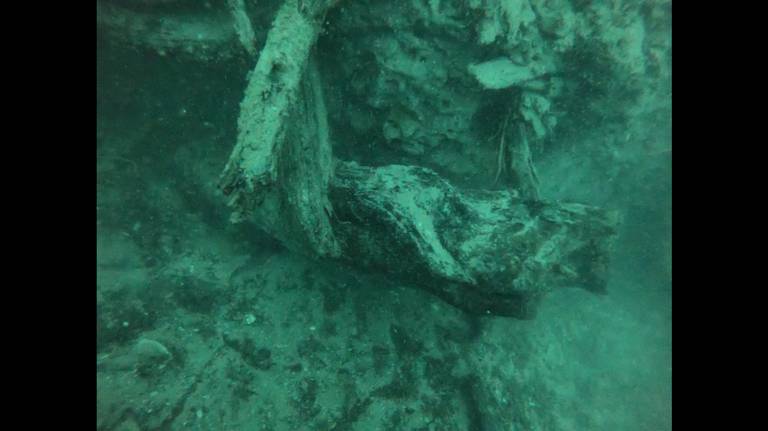 ALABAMA—Nearly 60,000 years ago, a bald cypress forest flourished on the banks of a prehistoric river near the Gulf of Mexico. Over time, the massive trees grew and died, their enormous trunks falling and becoming entombed in a protective covering of peat and sediment.

These ancient forest remains were buried beneath the sea surface off the coast of Alabama, where they remained undisturbed for millennia.

“Intensifying storms along the coast, however, have scoured the seafloor, beginning to expose this ancient submarine forest,” the National Oceanic and Atmospheric Administration, or NOAA, said in a released statement.

NOAA’s Office of Ocean Exploration has orchestrated a study with scientists from Northeastern University and the University of Utah to research the haunting site. One of the goals is to investigate if the prehistoric trees host undiscovered “compounds for medicine biotechnology,” which can be a basis for new types of antibiotics.

NOAA video from the site shows it is alive with schools of fish. Marine animals and microorganisms that live on submerged wood and inside it are of particular interest.

“The team’s focus is on bacteria found in wood-eating ‘shipworms,’ a type of clam,” NOAA staff said in a released statement. “These ‘termites of the sea’ convert wood into animal tissue, forming the base of a food chain that can support a rich diversity of fish, invertebrates, and microorganisms in communities that resemble thriving coral reefs.”

Field work began in December with timbers collected from the submerged forest. Scientists discovered the ancient wood hosted more than 300 animals and 100 strains of bacteria, many of which are novel. The team intends to continue field work in August through December.

According to the project overview, previous work by the research team on bacteria in shipworms has resulted in at least one antibiotic being under investigation as a drug to treat parasitic infections, and the overall biopharmaceutical potential for these bacteria is high.

The project overview stated drug compounds produced by symbiotic microbes are less likely to display toxicity toward animals than free-living bacteria, as these molecules have essentially been “pre-screened” by their animal hosts. They can be reproduced under lower temperatures and less harsh conditions than current industrial processes, meaning a potential cost savings for industrial applications.

The wood at the site off the Alabama coast has been submerged and buried in a deep layer of sand and sediment for thousands of years, creating an isolated and unique habitat for discovery of unusual microbes and molecules, according to the overview.