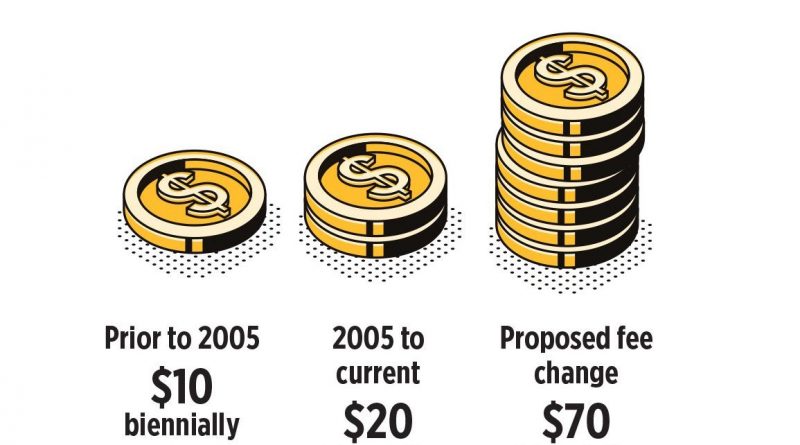 Governor Gavin Newsom’s proposed 2021-22 budget, released Jan. 8, includes a proposal to raise the vessel renewal fee from $20 every two years to $70 every two years to help stabilize a $52 million deficit in the Harbors and Watercraft Revolving Fund.

SACRAMENTO—A 250 percent increase in California’s vessel registration fee has been proposed as part of the state’s 2021-22 budget. The fee hike from $20 to $70 biennially could be implemented as soon as July 1 but legislation would be needed to implement the change, according to budget documents. The fee increase is part of the “Fiscal Stability for Boating Programs”, which includes several other adjustments to address what California State Parks staff said will be a $52 million annual deficit in the Harbor and Watercraft Revolving Fund (HWRF), which is the primary fund source for boating programs managed by the California Division of Boating and Waterways (DBW).

“During this time, the fund has faced increasing cost pressures, such as climate-driven expansion of the Aquatic Invasive Plant Control Program (AIPCP), liabilities for Davis Dolwig payments, new fund commitments for the Public Beach Restoration Fund, and increasing employee compensation costs, without additional revenue sources,” said DBW staff in a statement emailed to The Log.

“Without a proposal, we will not have sufficient resources to continue at current service levels,” said Deputy Director of Administrative Services for California State Parks Will Schaafsma during a presentation on the proposed budget at the Feb. 11 Boating and Waterways Commission meeting.

Vessel registration fees and motor vehicle fuel tax revenues attributable to boating are the primary revenue sources for the HWRF. With the proposed vessel fee increase, vessel registration revenues are estimated to increase by an average of approximately $22 million annually.

An increase in the vessel registration fee is expected to cost the DMV $3.25 million to modify the systems used to collects the vessel fee on behalf of DBW.

Schaafsma, in his presentation, said the fee increase would be a temporary solution to avoid a negative fund balance for the next several years and a long-term revenue strategy would be put together. One long-term strategy being considered is moving to a tiered vessel registration fee system based on vessel length.

“We believe it is a more equitable approach to fee raising, similar to the way DMV charges registration fees,” Schaafsma said at the meeting.

Recreational Boaters of California, a nonprofit advocacy organization for boaters’ interests, released a statement on Jan. 29 saying the organization was not supporting the proposed 250 percent increase in the vessel registration fee starting July 1.

“RBOC took a look at it and talked to our colleagues in the boating industry and different groups and we can’t see ourselves saying yeah, let’s go for it, let’s raise the fees 250 percent,” said Jerry Desmond Jr., RBOC’s director of government relations.

RBOC in a May 2020 letter to State Parks had requested transparency as to the exact amount of boat fuel tax revenues that go to the HWRF. RBOC leaders said they didn’t receive a response until February 2021, after the budget had already come out.

Schaafsma shared details about this in his presentation at the commission meeting. He said the governor’s budget this year projects $107 million of California gas excise tax will be attributable to boaters. Out of that, $15 million would go to HWRF, with $39 million going to the General Fund and $53 million going to the State Parks and Recreation Fund (SPRF). Schaafsma said when they spend fuel tax dollars from the SPRF, they are benefiting boaters as well, something not everyone seemed to agree with.

“The February 8 letter provided new information that confirms our concerns and raises new issues,” RBOC President Winston Bumpus said at the DBW Commission meeting. “…and confirms our suspicion that boater fuel tax dollars are being steadily and increasingly redirected away from the Harbors and Watercraft Revolving Fund into the state General Fund and other funds in State Parks.”

A representative from the National Marine Manufacturers Association and several others also voiced opposition to the proposed fee increase at the Boating and Waterways Commission meeting.

RBOC said they will be actively advocating with the governor’s administration and other stakeholders to resolve these issues.

Staff note: This article has been updated to fix a typo. The original version used the word “suspension” but was meant to be “suspicion”