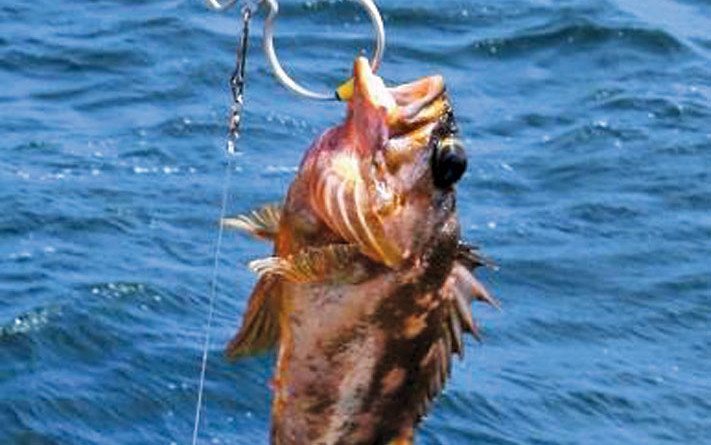 STATEWIDE — It is not uncommon for an angler to reel in a rockfish and believe – because of eyeballs popping out – life has left the scaly red/orange body. Rockfish generally suffer from barotrauma as it nears the water’s surface, causing its eyes to bulge from its socket and stomach to protrude out its mouth.

A pair of bulging eyeballs and a protruding stomach, however, does not indicate all is lost for the brightly colored fish. Descending a rockfish back into safe water depth can save the groundfish species.

A National Oceanographic and Atmospheric Administration (NOAA) states a rockfish can revive itself despite barotrauma if it is descended back into the water 2 minutes after it is caught.

“The most significant predictor of post-release survivorship is the time a fish spends at the surface. In experiments with several species of common Southern California rockfish, 83 percent of fish caught at depths between 217 feet and 350 feet, survived when returned to depth within 2 minutes,” NOAA stated in an informative brochure published through its West Coast Fisheries division. “The odds of a fish dying following recompression nearly doubled with every 10 minute increase in time at the surface. Tagging and recapture studies showed some released fish were still alive 1.5 years later.”

NOAA list three ways to properly return a rockfish experiencing barotrauma into the water to allow it to decompress and revive itself:

Weighted upside-down milk crate with rope: NOAA suggests dropping a crate, attached to a rope with the open side facing the water, over the buoyant rockfish. With the fish inside, drop the crate to about 60 feet below water level and wait for it to revive itself and swim away on its own. Rough seas might prevent this technique from working effectively.

Commercial fish descenders: This might be the most practical tool to use. Which one works best depends what you are able to find (and afford) on the market. Follow the instructions of whichever commercial hook you purchase.

The state’s Department of Fish and Wildlife discourages venting. Also, throwing a rockfish suffering from barotrauma will not spare the groundfish species from dying; the inflated fish will just float on the water’s surface, failing to regain any life.

NOAA’s complete brochure of how to handle rockfish above and below water can be found here: 1.usa.gov/1DSP8uY.

One thought on “Releasing a caught rockfish can save its life”