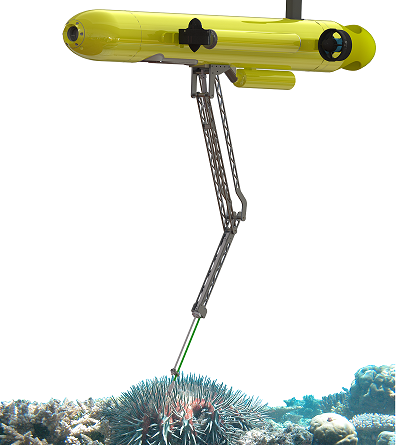 BRISBANE, Australia – Queensland University of Technology (QUT) roboticists have developed the world’s first robot designed to search for the Great Barrier Reef’s crown-of-thorns (COT) starfish, which are responsible for an estimated 40 percent of the reefs decline in coral cover, according to the university.

COTSbot’s creator Matthew Dunbabin from QUT’s Institute for Future Environments, said the robot’s stereoscopic cameras give the device depth perception. The robot is also equipped with five thrusters to maintain stability, GPS and pitch-and-roll sensors, and a pneumatic injection arm used to deliver a fatal dose of bile salts.

“Human divers are doing an incredible job of eradicating this starfish from targeted sites but there just aren’t enough divers to cover all the COTS hotspots across the Great Barrier Reef,” Dunbabin said.

“We see the COTSbot as a first responder for ongoing eradication programs – deployed to eliminate the bulk of COTS in any area, with divers following a few days later to hit the remaining COTS,” he added.

According to the COTSbot creators, the device is designed to search the reef for up to eight hours at a time, delivering more than 200 lethal shots to the COT.

QUT roboticists have spent the last six months developing and training the robot to recognize COTS among coral, using thousands of still images of the reef and videos taken by COTS-eradicating divers.

“If the robot is unsure that something is actually a COTS, it takes a photo of the object to be later verified by a human, and that human feedback is incorporated into the robot’s memory bank,” said Fera Davob, who designed the COTS detecting software.

The COTSbot is planned to be working the reef autonomously in December.