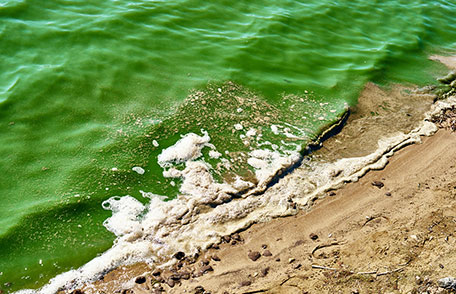 Between 2014 and 2016 the entire coast of California experienced one of the most notorious documented ocean HABs in state history. Anomalously warm ocean conditions resulted in a coastwide bloom of the phytoplankton toxigenic diatom Pseudo‐nitzschia in spring 2015, resulting in the largest recorded outbreak of the neurotoxin, domoic acid, along the North American west coast. Elevated toxins were measured in numerous stranded marine mammals and resulted in geographically extensive and prolonged closures of razor clam, rock crab, and Dungeness crab fisheries.

Southern California Coastal Ocean Observing System (SCCOOS) at the University of California San Diego Scripps Institution of Oceanography is one the scientific agencies researching and collecting data on HABs in California. SCCOOS provides information to stakeholders who use the data and model products to improve management decisions for marine operations, fisheries, water quality, and ecosystem/public health.

“What we want to do is make it relevant to our stakeholders,” SCOOS Executive Director Clarissa Anderson said during a webinar event on July 30. The newly started webinar series is part of the effort to better connect SCCOOS’s HABs data to stakeholders.

Since the 2014/16 HAB, SCCOOS Executive Director Clarissa Anderson said SCCOOS and its partners have “crossed the valley of death,” a phrase used to describe the progression from research to real-life application.

One of the tools SCCOOS now provides is the California Harmful Algae Risk Mapping (C-HARM) system, which generates three-day forecasts of coastal conditions conducive to blooms of Pseudo-nitzschia and its associated toxin, domoic acid. The model was moved from research to operations in 2018.It has been used by marine mammal resource managers because of the association between HABs and marine mammal strandings.

Domoic acid is a concern for marine mammal health because DA is a potent neurotoxin and can cause cell depolarization, dysfunction, and cell death, resulting in seizures, epilepsy, cardiomyopathy, and death depending upon the ingested dose. In humans, domoic acid is the cause of a neurotoxic illness termed amnesic shellfish poisoning (ASP), following consumption of contaminated shellfish.

Another sector where this information has and could further be applied is in aquaculture farms. The information provided by SCCOOS is currently being used by Baja Aquafarms in Ensenada, Mexico. Anderson said the farmers could use the information to predict a bloom with the potential to kill the tuna in their farms before it happens. Anderson said SCCOOS’s data is not currently widely used among this sector but predicted its use would grow alongside aquaculture on California’s coast.

While the early warning system may not be able to solve the problem, it could protect human health or seafood resources before a problem occurs.

SCCOOS said research tools for HABs are experiencing a renaissance, and expect to soon highlight many more observations from technologies. One of SCCOS’s goals for future models is to incorporate food web effects to be able to provide predictions on specific fisheries and toxin risk.