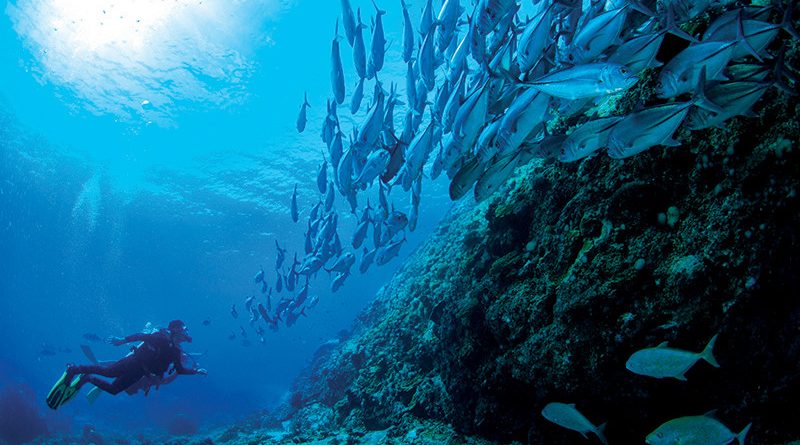 Previously the best way to account for fish in the region was to have a diver go in and count the fish through physical identification. Shutterstock photo

The research provides a library of DNA “barcodes” that identify 605 different species in the California Current.

LOS ANGELES一 University of California, Los Angeles released a study on July 8 categorizing 605 species, including 275 species previously not identified, that live in the California Current into a genomic library using DNA barcodes created from the unique order of amino acids that identify each species.

In a July 8 press release UCLA said the new database would enable researchers, conservationists, fisheries, and wildlife managers to better understand what is happening to native species and their ecosystems.

While the database is not currently able to account for abundance, how many of the species are in the area, it does account for what species are there which can be helpful moving forward.

The database can be used to monitor these systems more closely and hopefully identify hotspots where species may need more protection, and could allow authorities a better handle on policing the fishing industry for the capture or harvest of endangered species.

The database could also lend itself to managing fisheries by using samples to identify how many eggs are being produced by important species of fish and help maintain healthy populations.

Researchers led by UCLA ecologist Paul Barber used environmental DNA, a genetic material shed by in this case, marine life, into their environment.

Using the material allowed scientists to collect samples of ocean water that they could then test for the environmental DNA and compare to the DNA they already had on file.

“It’s like a crime scene where there is lots of forensic evidence, like blood or hair,” said Barber in the July 8 press release. “It isn’t useful unless you have a potential match in a database.”

Previously species were found by physically counting and identifying the marine life through divers or by counting fish eggs and larvae under a microscope, a process that can be limiting. Researchers are hopeful that with this new library other researchers can identify species with scoops of water that can be analyzed in a shorter period of time.

“In the field, visibility can be poor and conditions too dangerous to scuba dive — it’s even tougher for the deep sea where you can’t even send divers,” said Zack Gold, researcher at the University of Washington and the National Oceanic and Atmospheric Administration and lead author of the paper, in the press release. “But you can always take a water sample off the side of the boat. With eDNA, we can survey places we couldn’t previously survey in any meaningful way.”

According to the press release, eDNA databases must be tailored to individual ecosystems and species but the paper lays out the best way to accomplish that for future libraries around the world.