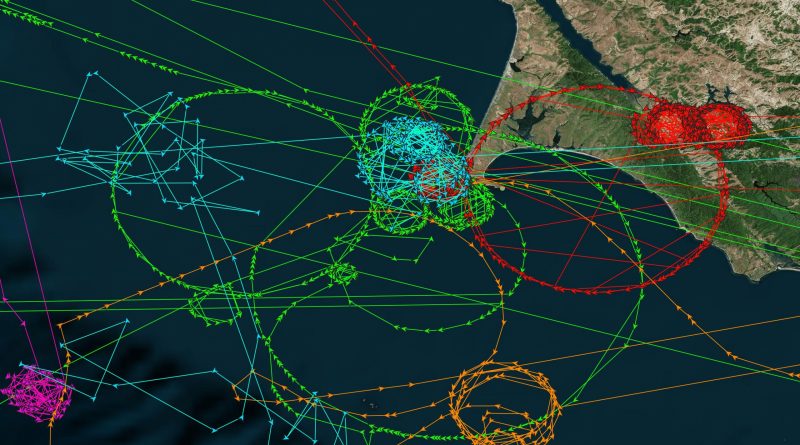 SAN FRANCISCO—An unusual pattern of false automatic identification system (AIS) broadcasts concentrated at one location, Point Reyes, off the northern California coast, has drawn the attention of an analyst examining vessel tracking data. The AIS broadcasts showed ships sailing in circles off the coast of San Francisco when they were actually thousands of miles away.

Bjorn Bergman, from SkyTruth and Global Fishing Watch, identified nine locations affected by these types of broadcasting signals and has been trying to figure out why these circling AIS tracks are appearing specifically at Point Reyes. One of the boats, a crew boat traveling to offshore oil installations, broadcasted a normal track out of a Nigerian oil terminal until June 5, 2019. For the following two weeks the vessel broadcasted a false location track circling above Point Reyes and eventually veering off above Utah, during which time the track occasionally jumped back briefly to the Nigerian oil terminal. Other vessels were in Chile, Norway and Malaysia, among others.

Bergman said the AIS positions being broadcast over Point Reyes are obviously false because some of them are over land and they show a constant speed and oval pattern that a real ship track wouldn’t have.

“Still, it’s unclear why this location would somehow appear on AIS trackers,” Bergman wrote in a May 2020 blog post about the topic. “The fact that individual vessels in many different locations have been affected is puzzling and it’s unknown if any of these examples reflect actual disruptions of the GPS system.”

Bergman works with SkyTruth and the Global Fishing Watch research team to track vessels broadcasting false AIS locations and to investigate new sources of satellite data for vessel tracking and for detecting dark targets at sea. The AIS data and satellite information can also be used to find boats that may be fishing illegally.

Bergman analyzed the footprints of the satellites receiving the AIS positions, the location broadcast just prior to the jump to Point Reyes and then where the vessel reappears after the apparent circling finishes to determine the ship’s actual location.

Bergman’s analysis found some of the boats were near oil terminals or in locations where boats are known to have had GPS scrambled, such as the Suez Canal, while others were not. Bergman said it could be related to some sort of malfunction with the GPS device, or it could be deliberate manipulation.

“It’s tempting to speculate that there might be some connection to a major U.S. Coast Guard communication station in Point Reyes which was an important historic location for developing maritime communications technology,” Bergman wrote in the blog post. “While the Coast Guard left the area several years ago, volunteers continue to maintain at Point Reyes the only operational ship-to-shore maritime radio station.”

So far, the mystery of the Point Reyes ship crop circles remains unsolved. A similar situation in December 2019 happened at a number of locations on the Chinese coast, most of which were oil terminals. SkyTruth reported ship tracking positions from the AIS became scrambled as soon as ships approached within a few miles of a point on shore. SkyTruth determined in this case, it was an actual disruption of the underlying global positioning system (GPS) — or more broadly the Global Navigation Satellite System — and not just a shipboard AIS malfunction. However, it was unclear if the manipulation was specifically intended to mask ship traffic or if there was some other reason for disrupting GPS.