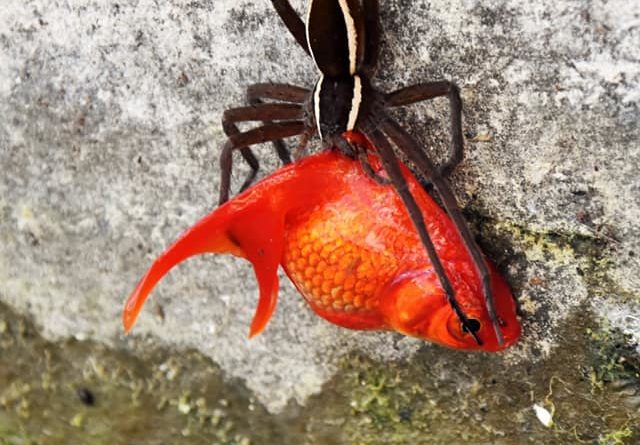 BARBERTON, South Africa—The story behind a photo shared on social media roughly a year ago is making headlines. The photo shows a pet goldfish in the jaws of a spider half its size.

According to an article published by The Sun, Jérémy Schalkwijk, a tour guide and photographer, took a date to his pond in Barberton, South Africa to show her his pet fish but when they arrived things took a turn for the worse.

Schalkwijk told The Sun he watched in awe as an eight-legged assassin clung onto the edge of the pond’s wall, with his pet fish caught in its fangs. He said the spider hauled its prey up the wall using a combination of its fangs and front legs. From the photo, the fish appears double the length of the spider.

In another bizarre twist to the story, Schalkwijk shared the photo to his photography Facebook page, JS African Dreamer, in February 2019. Several news outlets, including livescience.com, The Sun, Daily Mail and New York Post, picked up the story this month. The reason for the story’s recent press is unclear.

The spider was believed belong to the spider family Pisauridae, also known as nursery web spiders – a family of semi-aquatic arachnids that can walk on still water, dive beneath the surface to evade predators and even “fish” for prey many times their own size. According to britannica.com, nursery web spiders can have a leg spread of up to three inches.

Turns out spiders eating fish isn’t so bizarre after all. According to a 2014 study in the journal PLOS ONE, spiders in eight of the world’s 109 arachnid families can catch and eat small fish, and do so on every continent but Antarctica.