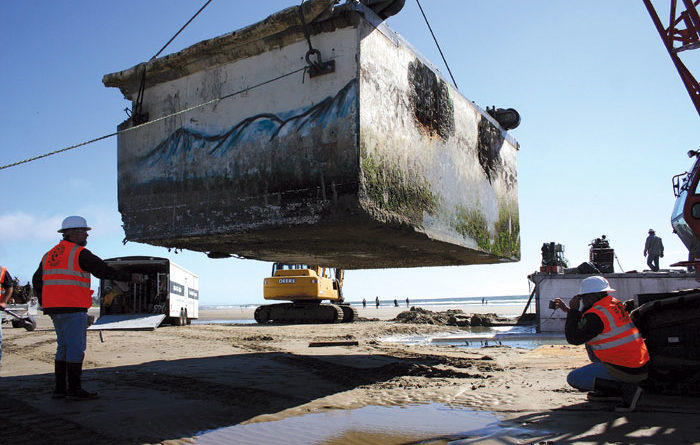 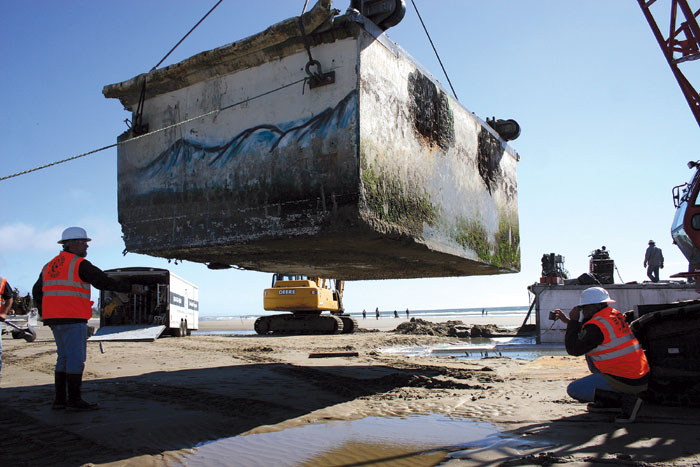 AGATE BEACH, ORE. (AP) — It took two tries, but the salvage team disposing of the Japanese dock that washed up on an Oregon beach after last year’s tsunami managed to finish the first cut through the boxcar-size hunk of concrete, Aug. 2.

But Oregon Parks and Recreation Department spokesman Chris Havel said the severed section turned out to be too heavy — at 47 tons — for a flatbed trailer to haul it away. So, the section stayed on Agate Beach north of Newport until a bigger trailer was brought in the next day.

Havel said biologists looked at the bottom of the severed section and found some invasive species, such as Japanese acorn barnacles, but they were all dead.

The crew from Ballard Diving and Salvage of Vancouver, Wash., was cutting the dock into five sections, so the pieces could be hauled to a Portland suburb for disposal. One section was planned to be returned to Newport, to be included in a memorial.             The workers had expected to be done Aug. 2, but they ran into difficulties with a piece of equipment known as a wire saw, which amounts to a cable that runs in a loop around the dock, cutting through the concrete.

Workers thought they had finished the first cut Aug. 1, but a crane couldn’t lift it onto a truck. So, a whole new cut was started Aug. 2.

Havel said it was first thought that the piece was held down by suction between the dock and the wet sand. A backhoe was able to wiggle the piece, which they had estimated would weigh about 33 tons — one-fifth of the 165-ton piece of concrete, steel and styrofoam.

But it turned out the saw failed to cut through four or five pieces of rebar. After the cutting wire broke Aug. 1 and a new one was threaded through the cut, it missed a spot.

The dock washed ashore June 5. It is the biggest single piece of tsunami debris so far to float some 5,000 miles across the Pacific and wash up on North America’s shores.

An abandoned fishing boat that appeared off Alaska was sunk. A motorcycle in a shipping crate appeared on a remote island off British Columbia and went to a museum.

A soccer ball reached Alaska. And officials are still keeping an eye on what appears to be a barge floating off the coast of Washington.