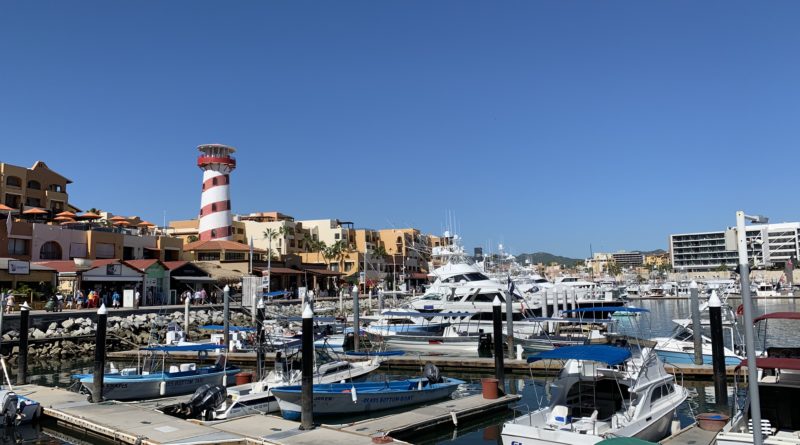 Quaint marina at the base of the harbor greets boaters, offers its services with a personal touch.

CABO SAN LUCAS, Mexico—Marina del Rey, the Los Angeles County enclave, usually receives all of The Log’s attention. It’s easy to know when we are talking about the largest small craft harbor in Southern California: the “d” in “del” is always lower-cased. There is another Marina Del Rey for boaters to know of, and this one capitalizes the “D” in “Del.” Boaters who head south of the border might already be aware of this Marina Del Rey – it’s the first marina they see whenever they cruise into the harbor at Cabo San Lucas.

Cabo San Lucas, of course, might be the “lively” destination of the two Cabos – but boaters who decide to drop anchor at Marina Del Rey might experience the more laid-back feel of San Juan de Cabo.

Marina Del Rey, for starters, is one of two marinas in Cabo San Lucas Harbor. The 800-pound elephant in the room is IGY Marinas, which is home to 380 slips. Then there is the 25-slip Marina Del Rey – but what the marina lacks in quantity, it makes up in quality.

First, a few statistics – Marina Del Rey’s max draught is 13 feet, while the maximum length is 82 feet. It has its own fuel dock. Many of the harbor’s excursion businesses are also based at Marina Del Rey, meaning boaters won’t have to walk far if they want to charter a fishing trip or other aquatic adventure.

One of the greatest perks of Marina Del Rey is its location – it is walking distance to at least half of the Cabo San Lucas waterfront boardwalk. Senor Frogs, Captain Tony’s, Solomon’s Landing, Las Brisas and Baja Cantina Cabo are among the restaurants you’ll be able to walk to in a few minutes.

Perhaps the greatest amenity of them all, however, is the personal attention and service offered by Marina Del Rey’s staff. Brian Hopper, the marina’s manager, manages a solid operation. He and his staff regularly interact with boaters and visitors, offering assistance with marina services or giving them pointers of how best to enjoy Cabo San Lucas (or Los Cabos, as a whole). The staff here certainly makes everyone feel special and at home.