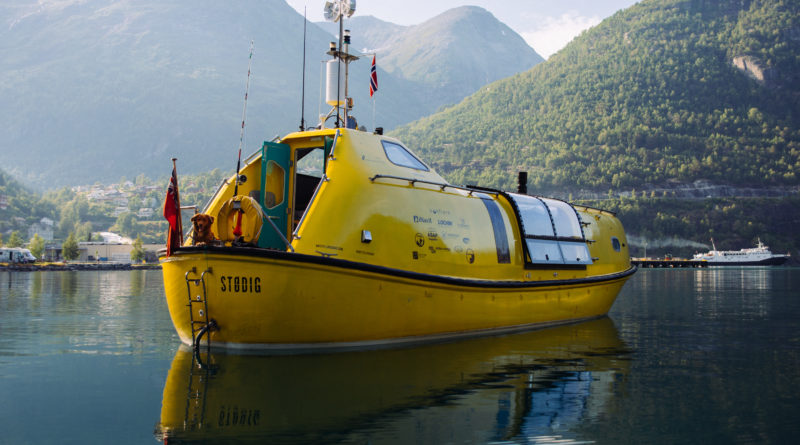 British architects Guylee Simmonds and David Schnabel repurposed a 100-person lifeboat into a houseboat for a months-long journey.

SUSSEX, United Kingdom—It looks like a yellow submarine, but this former lifeboat has a new purpose as the ultimate adventure vessel. British architects, Guylee Simmonds and David Schnabel, converted the old lifeboat into a houseboat and in May used it to go on a four-month journey from the Sussex Coast in the United Kingdom to the Arctic Circle, with even more travels planned.

Named Stodig – Norwegian for steady – the boat is about 33 long, 10 feet wide with about 6.5 feet of headroom and weighs about 5 tons. The lifeboat had been decommissioned from a Scottish ferry where it, thankfully, never got its moment of glory as a savior.

The idea for the journey started with a conversation about an extended hiking trip around Northern Norway. Simmonds said he spotted a part-converted lifeboat on a river three years ago and the idea snowballed from there.

In January of 2018, Simmonds and Schnable left their jobs, but did still work while on their journey.

“Alongside our jobs we were completing our onerous professional studies, in the final phases of seven years of architecture qualification, our yearning for adventure became an escape for both of us, as we dreamt of grand plans exploring the world,” said Simmonds.

Eight weeks after leaving their jobs, the decommissioned lifeboat arrived in the southern British port of Newhaven. Simmonds described the lifeboat as a robust, unsinkable and spacious blank canvas. They used their previous building design experience to inform their ideas for their adventure vessel. They wanted to capture the views and bring the outside in, and given they were headed to the Artic, they also wanted to keep the outside out.

“We wanted to be able to go on a big hike with Shackleton [their dog], or swim in the fjords or go skiing in the winter and come back to a warm, comfortable space where we could have a hot shower and also dry our gear off,”Schnabel said.

They built windows, a deck, and a seating area that faced a friendly-sized kitchen, with a large sink, lots of counter space, a 150-liter fridge and a domestic-size oven. The boat also has a large bathroom, two staterooms and two bunk beds for guests.

The boat has 900 watts of solar power and two 12-volt batteries on board. One battery is for the engine starter and cruising, navigation, and winches. The other battery is the domestic bank and handles the refrigerator, composting toilet, toaster, kettle, power tools, and their laptops all day long. They described not having to worry about how regularly they go into a marina to charge up batteries as a gift.

“When we are at anchorage, totally off grid, that’s when life is best on the boat,” Schnabel said in an emailed statement. “Everything works as it should and you have the benefits of remoteness and the beautiful views.”

The journey began in the middle of May when the pair and their dog, Shackleton, left Newhaven. Simmonds is a third-generation seaman, while this was Schnabel’s first time as a crew member. They skirted along the Dutch coast, passing the Kiel Canal into the Baltic, ending their more than 3,100-mile trip in Norway. Their view changed about every six knots, which is the pace of the boat.

“We live in harmony with the weather and the sea and the boat itself and that’s definitely quite a change from the lifestyles that we left,” Schnabel said. “The journey is about taking it slow and living life at a slightly different pace.”

Off the Stad peninsula – a fierce headland with a notorious reputation for shipwrecks dividing the Norweigian Sea to the north and the North Sea to the south – they cruised in near glassy conditions. They said they navigated through heavy fog where sea and sky met seamlessly and ethereally at the horizon until the prominent headland of the peninsula broke through.

“A passage dominated by our caution of the headland, actually became memorable as one of our most atmospheric and beautiful times as sea,” Schnabel and Simmonds wrote in an email.

As for how the boat held up, they said it held up far better than they expected. They said they did have some engine issues in Denmark about four weeks at sea, but were able to get those resolved.

They said the best part of the trip was Geirangerfjord, the most dramatic of Norway’s thousands of fjords. Geirangerfjord has 1,500 meter precipices with near vertical cliffs dropping down to the waters below. They said they were dwarfed by the scale of the cliffs.

“Anyone who has spent much time in a boatyard will come across dozens of people who have projects and dreams and, unfortunately, other things in life will get in the way,” Schnabel said. “If you want to take a big trip, you just have to keep in mind why you are doing it in the first place, then take a leap and get on with it.”