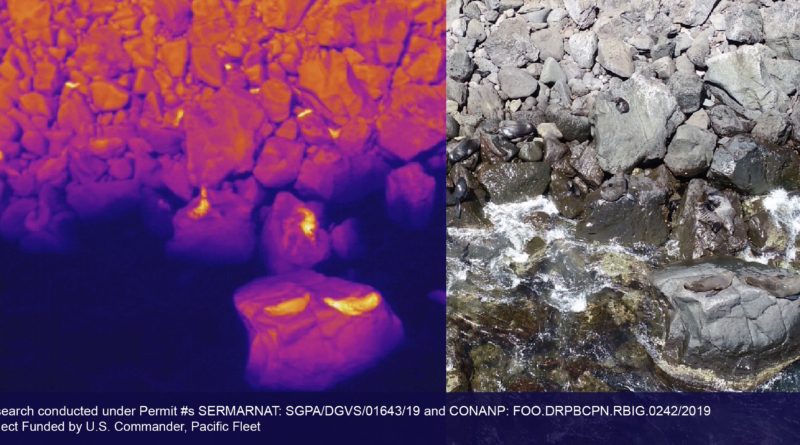 Matthew Pickett, founder and president of Oceans Unmanned, spoke at Santa Barbara Maritime Museum about how drones are being used for ocean and coastal research.

SANTA BARBARA—We know unmanned aircrafts for their use in the military and among hobbyists, but now they also have a role in coastal and oceanic research. Drone technology is now being used in whale disentanglement missions, to study marine animals and to study use patterns of recreational and commercial boaters.

Now, Pickett pilots similar projects, but from the ground. He retired about 10 years ago, just about the same time NOAA was getting hand-me-down unmanned aircrafts from the military. He said NOAA approached him for help figuring how they could use that technology to assist in their projects and research.

“The stuff I was doing in manned aircrafts, they wanted to figure out can we do something to augment, supplement with this new technology,” Pickett said.

Seeing that need, Pickett founded Oceans Unmanned, a nonprofit dedicated to protecting oceans and coastal marine environments by facilitating the use of unmanned technologies and promoting their safe and environmentally conscious operation through education and outreach.

“There is a niche out there for the use of this technology for environmental research,” Pickett said.

He said Oceans Unmanned wants to harness the optimism, creativity and innovation of Silicone Valley culture and apply it to solve environmental issues. Pickett highlighted some of the projects Oceans Unmanned has been involved with at a lecture at Santa Barbara Maritime Museum on Sept. 12.

One of the latest was a fur seal survey on Guadalupe Island in Mexico. Guadalupe fur seals are listed as threatened under the Endangered Species Act and depleted under the Marine Mammal Protection Act. NOAA has been assessing the population for years to evaluate the effectiveness of conservation and recovery measures, and to adjust management.

Currently, that assessment relies on two teams of visual observers doing manual counts. However, the rocky terrain makes it difficult to accurately count the population. Oceans Unmanned was asked to participate in this year’s survey, to see if drones could either replace what they are doing or develop correction factors.

“So that they say we know we are missing 40 percent of the animals so whatever our counts are, we’ll multiply them by 1.4 and get a more accurate count,” Pickett said, giving an example of how a correction factor could be used.

“Infrared, we think, is going to be a powerful tool to try to find these pups that are tucked into the rocks,” Pickett said.

Other types of projects Oceans Unmanned has been involved with include visitor and vessel use surveys, habitat mapping and characterization, enforcement, emergency response, marine debris and maritime heritage.

A project in the Florida Keys mapped prop scars where boaters were cutting the corners of the channels so the channel markers could be redone to discourage damage to the sea grass. Pickett said information from these visitor use surveys is vital to zoning regulations.

“Back when I was sanctuary superintendent, knowing where visitors, kayaks, boats were congregating and using the sanctuary and park was to me the most critical data point, as any regulations affects only human behavior,” Pickett said. “The wildlife and environment don’t care about zones or regulations.”

However, Pickett said this use is still a bit controversial, with some viewing it “big brother is watching.”

Other possible uses for drones related to boating include initial support in emergency situations —such as for sinking boats, spotting ship wrecks and assessing damage from oil spills.

Drones can fly anywhere from as little as 20 minutes to as much as 60 minutes at a time. They can cost anywhere from $1,500 to $35,000 and Pickett compares drone technology advancement to the iPhone, with new versions coming out every year.

“The capabilities are improving every year,” he said.

Oceans Unmanned also runs a program called freeFLY, which is a volunteer network of trained drone operators who support marine mammal entanglement response efforts. They also run an educational program called ECO-drone, which encourages environmentally conscious operations of drones to protect and limit disturbances to marine resources. To learn more about Oceans Unmanned and the projects they are involved with visit oceansunmanned.org.