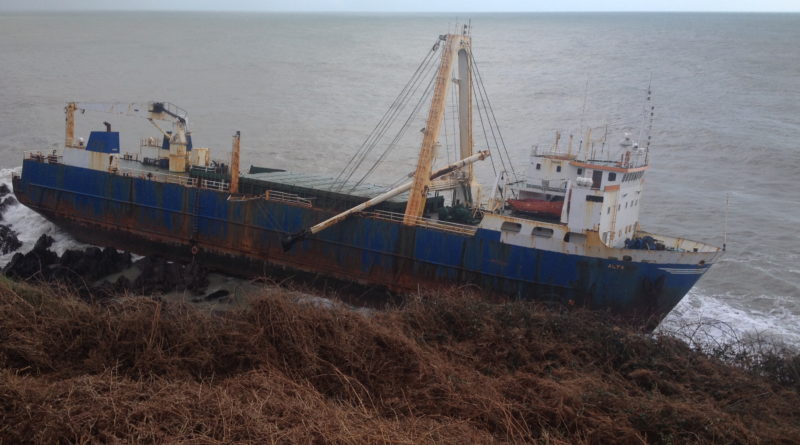 IRELAND—After floating unmanned and mostly unseen for more than a year, MV Alta will not be doomed to sail the oceans forever, such as the Flying Dutchman.

The 77-metre (252-foot) cargo vessel traversed the Atlantic with no crew and no passengers for about 17 months until a February storm ran it aground near Ballycotton, a fishing village in County Cork, Ireland.

The unmanned voyage began in 2018 when the ship became disabled while traveling from Greece to Haiti, according to media outlets. Unable to make repairs, all the crew members onboard were rescued by the US Coast Guard’s Cutter Confidence in October 2018, about 1,380 nautical miles southeast of Bermuda.

An unverified report emerged in Maritime Bulletin suggesting the ship may have been towed toward Guyana in South America before being hijacked and abandoned for a second time.

“Two days ago @hmsprotector discovered this apparently abandoned Merchant Vessel whilst mid-Atlantic. We closed the vessel to make contact and offer our assistance, but no one replied,” HMS Protector tweeted on Sept. 2, 2019.

The unmanned journey came to an end on Feb. 16 when storm Dennis battered Ireland with hurricane strength winds, dumping the cargo vessel into a rocky area just offshore.

In a spooky coincidence, another seemingly abandoned ghost ship washed up without a crew close to Ballycotton, almost exactly 125 years to the day that MV Alta was discovered, according to Irish Examiner. In February 1895, the Saga was discovered “derelict” and “rudderless” near Ballycroneen, between Poor Head and Ballycotton, according to a report in the Cork Examiner at the time.