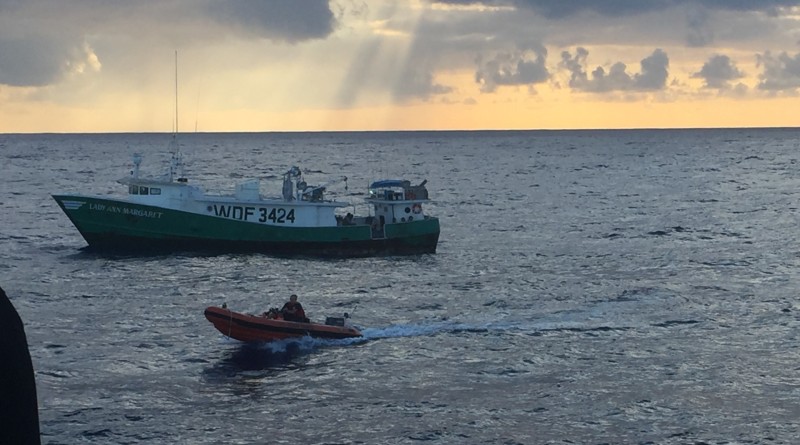 HONOLULU — A joint patrol effort between the crew of the USCGC Galveston Island (WPB 1349), a 110-foot patrol boat homeported in Honolulu, and NOAA’s Office of Law Enforcement in early March identified two potential cases of illegal fishing in the Pacific Ocean.

“This patrol directly supports our mission under our Ocean Guardian Strategy to protect the nation’s living marine resources by employing the right tools in the right place at the right time,” said Lt. Cmdr. James Bendle, chief of enforcement, Coast Guard Sector Honolulu.

While on patrol with an enforcement officer from NOAA OLE aboard, the crew conducted nine joint boardings resulting in two cases of apparently illegal fishing being referred to NOAA for possible prosecution.

Galveston Island’s boarding team conducted boardings on the 77-foot commercial fishing vessel Captain D and the 71-foot commercial fishing vessel Lady Ann Margaret, both more than 350 miles off Oahu. Neither vessel had the federal permit required to fish on the high seas. The master of Captain D was advised to return to the U.S. Exclusive Economic Zone, an area where the vessel was allowed to fish, if the vessel intended to continue fishing. The master of Lady Ann Margaret was directed to return to port due to numerous safety violations.

Both alleged fisheries violation cases are being investigated by NOAA OLE, which will handle any subsequent actions.