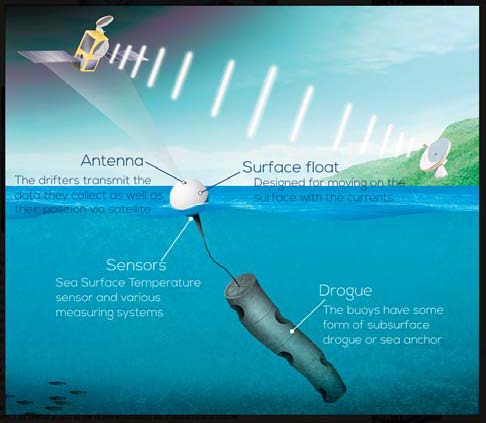 Teams in international nautical competition placed a new batch of drifter buoys in the ocean.

WORLDWIDE — Ocean racers and federal scientists would appear to have little, if anything, in common. Yet a rare partnership between Volvo Ocean Race and National Oceanic and Atmospheric Administration (NOAA) could help us figure out what happens in some of the most isolated corners on Earth.

Crew from the Volvo Ocean Race deployed drifter buoys in a remote stretch of ocean in mid-November. The buoys would collect scientific data from these stretches of Earth virtually untouched by human contact and help NOAA scientists observe ocean trends.

Volvo Ocean Race teams are placing the drifter buoys as they navigate around the globe. A stretch of water between the South Pacific and Southern Oceans, roughly equidistant from Chile and New Zealand, for example, is essentially devoid of humanity and almost entirely undiscovered. Strategically placing such buoys could provide NOAA’s scientists and experts with new information about weather patterns and coastal trends.

Data collected from the free-floating “drifters” would specifically be used to deliver more accurate predictions of ocean conditions and regional climate patterns, according to a Volvo Ocean Race blog.

“These floating sensors are equipped with satellite communications equipment to transmit information on ocean composition and currents,” the Volvo Ocean Race blog post stated. “The hard part? Getting them into position. Because the most scientifically interesting areas are usually the most remote and isolated, very few boats actually travel along the routes.”

NOAA’s partnership with Volvo Ocean Race is quite significant, as the global boating event provides the U.S. federal agency with a vehicle to reach a portion of the world rarely navigated by commercial or recreational.

All seven Volvo Ocean Race teams deployed drifter buoys during the currently ongoing competition, which is currently in its second leg between Lisbon, Portugal and Cape Town, South Africa.

The Southern Ocean, for example, is rarely visited by oceanographers. Navigating from New Zealand to Chile via the Southern Ocean – as part of the Auckland-to-Itajai leg – might be one of the loneliest trips on Earth, as there are no terrestrial obstructions (i.e. continents or islands) to be found along between the eastern edge of Oceania and southwestern front of South America.

“If you’ve ever sailed onboard a ship, or checked the weather forecast before heading to the beach, then you’re one of millions of people who benefits from ocean observations – and the accuracy of those ocean current and marine weather predictions is key to the race fleet, too,” the Volvo Ocean Race blog post, penned by Jonno Turner, stated.

The World Climate Research Program, or WCRP determined drifter buoys, to be a valuable tool for climate and oceanographic research, according to NOAA staff.

The buoys deployed by Volvo Ocean Race’s teams would, according to the event’s organizers, “drift with ocean currents and transmit data on surface pressure, temperature and ocean currents through a global satellite network.”

Data from the buoys will contribute to NOAA’s Global Drifter Program, which helps NOAA and others maintain collected information for climate prediction and research.

NOAA officials describe “drifters” as a “high-tech version of ‘message in a bottle,’ It consists of a surface buoy and a subsurface drogue (sea anchor), attached by a long, thin tether.”

The drogue drops 15 meters beneath the sea surface, according to NOAA. A basic drifter set costs about $1,800.

Drifters, on average, function for about 450 days, though one managed to last for 10 years, four months and 21 days, NOAA staff stated. The average life span for a drogue is 300 days.

About three percent of drifters failed upon deployment, NOAA staff added. The most common reasons of drifter “death” are: picked up by fishermen; ran aground; and, stopped transmitting.

Drifter deaths aside, the free-floating buoys are a useful tool for NOAA scientists and experts to help them make more accurate weather forecasts and predictions.

More information about the drifter buoys program, including a status update on the many drifters deployed around the world, is available online at aoml.noaa.gov/phod/dac/index.php.