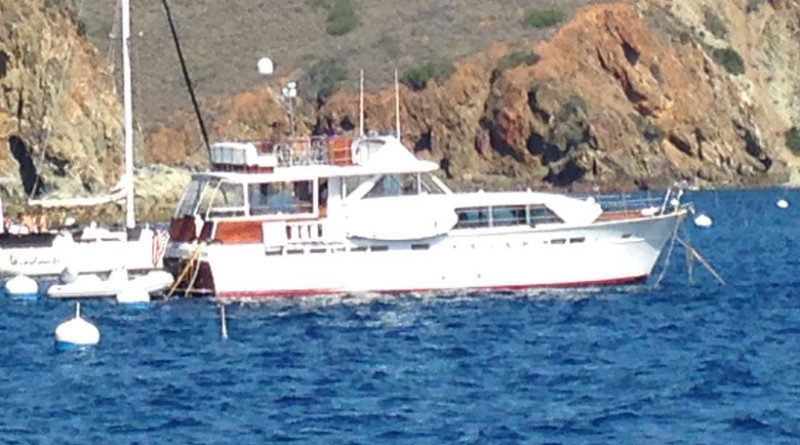 What’s in a Name: Merriam-Webster defines “adagio” as a musical direction to play “at a slow tempo.” Adagio owner Gary Clark explains the name of his Chris Craft Constellation as meaning “play slowly and gently.”

The Back Story: Clark explains how he came across the 1965 Chris Craft Constellation 57-footer:

“I first came to know Adagio through other friends that enjoy vintage wooden boats. The owner at the time was a professional musician and would invite us down to hang out and listen to various jam sessions and fell in love with the boat. I ended up buying the boat from him and started the long process of repair and restoration,” Clark said.

All in a day’s work: “Adagio had not been out of the water in many years and was suffering from rot and disrepair,” Clark said of his boat when he purchased her. “The ‘worm shoe’ was completely gone and the worms had done their job on the all wood bottom. My son, John Imus Clark, is a designer. He and I spent many hours designing and discussing how to restore her in a way that keeps the spirit of the original design but can allow for all the modern comforts and conveniences and electronics. John designed all of the custom furnishings. We are still debating on how to best restore the original captain’s chair and replicate it for the fly bridge.”

Clark explains Adagio “is basically a brand new boat” today, as he and his son have done quite a bit of work on her.

The father-son team repaired and replaced wood planks throughout the bottom to stop leaking, painted the ship’s bottom and hardware, refinished all natural teak decks and railings, upgraded the fly bridge (which was added to Adagio in the 1980s), updated the boat’s electrical work and added LED lighting, stereo and generators.

A slice of history: Clark explains Adagio has a little bit of Hollywood history. The Chris Craft was featured in a rap video spoof and was home to many musical performances. A now-divorced Hollywood couple can trace their nuptial beginnings to Adagio.

“Sandra Bullock and Jesse James got engaged on Adagio on a trip to Catalina,” Clark said. “According to the captain at the time, Sandra did the proposing.

Oh and there might be a connection to the Rat Pack.

“When we went to do the design and restoration I would think of it as belonging to Paul Newman and him having the Hollywood elite down for a party in 1966. Rumor has it Frank Sinatra and Dean Martin once hung out on her in the late ’60s,” Clark said. “Okay maybe I started the rumor, but Jackie Gleason actually did once own neighboring Chris Craft, The Savoy, so it only seems logical. Anyway there are some photos of these guys on the boat as homage to their spirit.”

“Adagio has had several owners before him but has spent most of her life right here in Newport in Lido Village,” Clark said. “[She] has had a few owners over the years and was certified by the Coast Guard as a charter yacht for many years.”