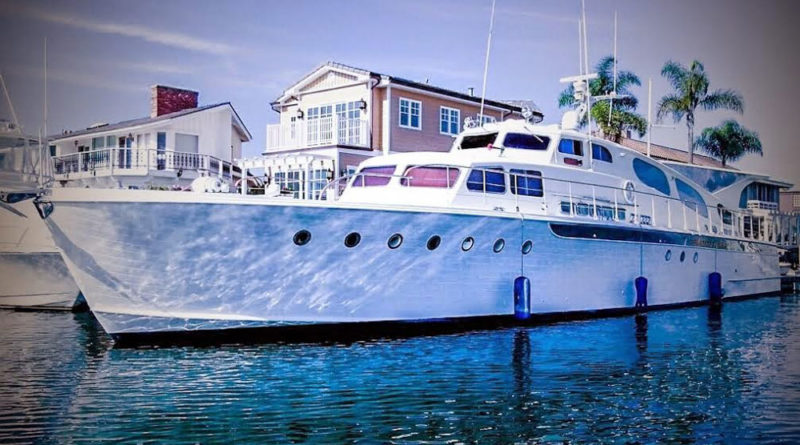 The Back Story: Aviator was not always a pleasure yacht. She was originally built during World War II and served in the military as a downed rescue pilot boat. During her service, Aviator was an Air Sea Rescue (ASR) vessel and performed coordinated searches of those who survived emergency water landings while in battle.

The military no longer used Aviator after the war ended in 1945.

“When I came across this abandoned and deteriorating 1944 warship in Newport Beach, I was riveted by her silhouette and sense of slumbering power. Her enduring beauty captivated me,” her current owner, Nico Santucci, said. “She was built for WWII and decommissioned just prior to being deployed as the war ended. She then went to Burger Yachts (known as the best builders in the world) to be converted to a ‘state of the art’ pleasure yacht.”

Aviator was one of two ASR vessels to be converted into a pleasure yacht.

What’s Inside: Step aboard Aviator today and you will never realize she was part of the WWII fleet. The yacht features a bar, posh furniture and modern designs, all courtesy of Santucci — a designer, entrepreneur and restaurateur who owns several properties in Las Vegas and Los Angeles

Aviator is powered by a twin –supercharged, 2,000-horsepower engine by Detroit Diesels.

The Lap of Luxury: Santucci may or may not be confused as a modern-day Howard Hughes, but his yacht certainly has luxurious elements the famous aviator might have enjoyed in his day. For example, Aviator’s visitors can enjoy a bottle of champagne stored inside a treasure chest or sunbathe on her deck.

The list of luxurious items found aboard the vessel should come as no surprise, as Santucci made a living modernizing classic mansions, opening upscale restaurants and converting nightclubs into the “It” place to be.

“Aviator feels sexy yet certain, detailed yet prepared and without concern for ever reaching land. She’s well equipped, even for the likes of Howard Hughes himself,” Santucci said. “I wanted passengers to feel like Mr. Hughes left this ‘opulence of the ocean’ untouched on his estate. I wanted to recapture a time on history using luxurious esthetics, yet also modern amenities.”

Loderhose’s Estate eventually sold the vessel to Santucci, who put his own work into Aviator.

A Slice of History: “One of the most interesting aspects of the Aviator yacht is she’s reminiscent of the Kennedy’s. We share that love of the infamous PT boat, a military vessel. The style of the PT boats during WWII is one of a kind, in particular when Aviator was converted to a luxurious pleasure yacht,” Santucci said. “The spirit of John Wayne is felt here. He spent many seaworthy days on Aviator. His energy is still here, powerful and determined.”

Notes: Aviator is currently docked at the Aquarium in Downtown Long Beach.