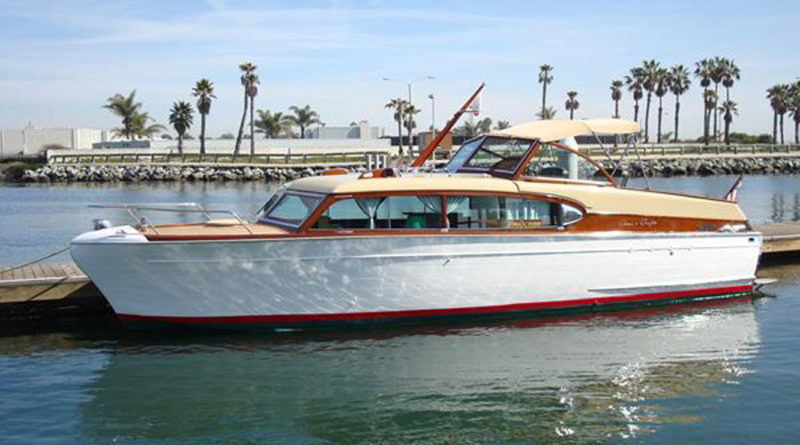 The Boat Formerly Known As …: Before she was ComOcean, the 1953 Chris Craft express model was Jayhawk.

“My wife and I bought the boat and placed it in a commercial building to do a full restoration that was intended to last six months, but turned out to be two years in the making,” said Ron Yatch, ComOcean’s owner. “This caused very long working hours for us both, having full-time demanding careers. My wife Cathy decided we should call the boat ComOcean.”

The Back Story: Chris Craft built ComOcean in 1953 as part of its El Capitan line. A few months after she was off the assembly line, ComOcean was shipped to R.E. Olson, a Chris Craft dealer in the California Delta area.

Yatch said he stumbled upon the El Capitan line thanks to a chance meeting.

“We had a chance meeting with a gentleman while driving past his Huntington Harbour waterfront home in the boat, and he came running down the dock to tell us that he was the owner when she was Jayhawk, with the black hull,” Ron Yatch said. “He said he used to take Jayhawk to Mexico with his two daughters to go fishing, and they carried extra fuel in metal cans on the back deck.”

Yatch has owned ComOcean for 21 years and said the boat has brought happiness to him in more ways than one.

“My wife, Cathy Yatch, and I purchased the boat in 1994, and restored her in a warehouse here in Orange County over a two year period, and re-launched the vessel in September of 1996 for final completion in the water. We were then married aboard her on the aft deck in February of 1997 while underway in Alamitos Bay,” Ron Yatch said.

According to her current owner, Ron Yatch, Chris Craft built the 33 footer for working Americans.

“This is not a yacht built for the high end buyer that so many other brands were built for prior to World War II; but instead a product of the post-war boom of working class professionals who wanted to spend time exploring the lakes, streams and shorelines with their growing families,” Ron Yatch said. “It was 1953, freedom abounded and re-building was a global endeavor, while the new rock and roll ruled the airwaves.”

All in a Day’s Work: “I have refastened the hull extensively and added structural internal support to offset the additional horsepower, since the boat can easily cruise up to 30 plus miles per hour. I have also replaced all the original glass with quarter-inch safety glass,” Ron Yatch said.

Notes: ComOcean is currently berthed in Huntington Harbour’s Christiana Bay. She is also a member of the California Yatch Association.