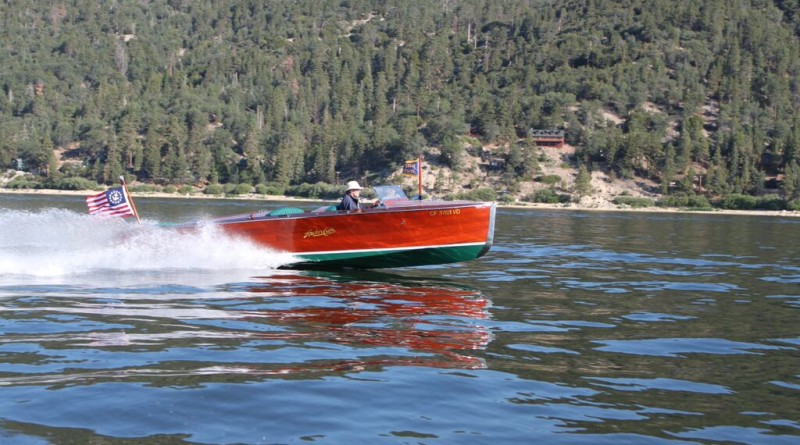 The Back Story: The Hacker-Craft Dolphin triple cockpit was the creation of John Hacker, a naval architect who is credited with developing the modern V-hull design.

According to Dutch Treat’s owner Tim Vanderveen, there is limited information about the classic yacht. However, he discovered the Hacker Boat Company advertisement: “In 1932 the 22.5-foot model was lengthened by 6 inches to add a bridge between the first and second cockpit and moved the steering to the starboard side. Advertisements during that era mentioned two 6-cylinder options (140 and 160 HP) with a top speed of 37 mph,” he told The Log.

A welcomed project: Vanderveen claimed Dutch Treat as his in March 2013 to fulfill his dream of owning a classic wooden boat. He came across the vessel while scrolling through Craigslist advertisements.

She had been in a barn in Jamul, Calif. for more than 25 years.

What’s in a name: When he purchased the boat three years ago from its former owner who is believed to have shipped the craft from Michigan to Lake Tahoe, she went by the name of Miss Sarah.

He renamed the Hacker-Craft Dutch Treat to pay tribute to his Dutch heritage and an inside joke he and his wife shared.

“During the restoration my wife kept telling friends she was traveling dollar for dollar on what I was spending on the boat. It was like going ‘Dutch’ – I pay my way, you pay yours – similar to Dutch treat for dating,” he explained.

“We were able to salvage and re-use almost all of the original hardware. Copper rivets were used to fasten the white oak frames and the stringers were reinforced with ¾ inch marine plywood on both sides to manage the additional horsepower. A new dry bottom was created with two ¼ inch layers of cold molded marine plywood, followed by ½ inch of mahogany, all epoxied together.

“Other than the upgrades to the hull, engine, steering and gasoline tank, the restoration was completed as true to original as possible,” Vanderveen said.

What’s Inside: All the seat platforms and upholstery are new. A new 5.7 L Mercruiser Scorpion 335 HP with 1:1 transmission and a new drive train were installed and the steering system now is a cable system.

Recent Notes: Vanderveen takes the boat for cruises on Big Bear Lake and trailers it to classic boat shows in Southern California.

Where currently berthed: Big Bear for the summer and Poway in the fall.