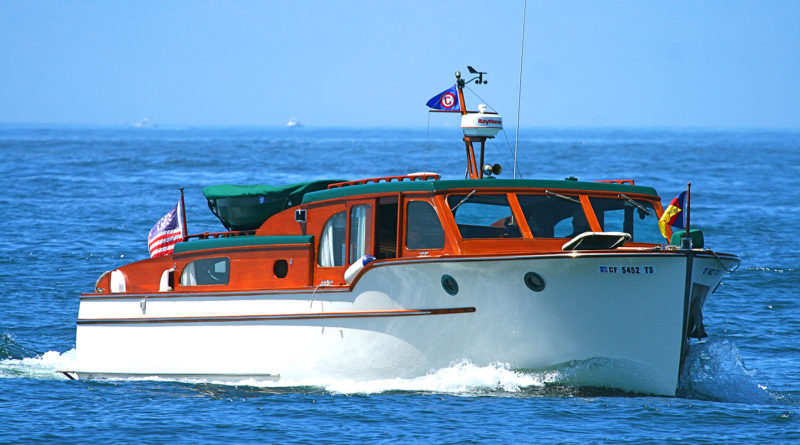 Background: Not much is known about the mysterious Ed Monk design – now dubbed Gracie – even by her current owner, Larry Walker. However, Walker has pieced together as much as he could about this classic wooden beauty, which was built by a Washington-based boat builder named Bud Fodor more than 60 years ago.

“The boat came from Washington State, just south of Seattle,” Walker stated. “The [previous] owner had owned her for 18 years and kept her in a boathouse. She was in fine shape, but has been a challenge to maintain the brightwork in California because of dryness and a need to cover nearly all of her with canvas, which comprises of 12 pieces put together like a jigsaw puzzle.”

Mentioning the most admirable qualities Gracie has, Walker added: “Gracie’s most outstanding feature is her design, which was done by Ed Monk, perhaps the most admired marine architect of his day. His designs have a distinctive look that catches the eye of any old boat enthusiast.”

A Boat Also Known as TuTuBaqs: Gracie wasn’t always known as Gracie. Previously, she had an owner who was passionate about birds and thus decided on the Native American word, TuTuBaqs, for a type of loon that thrives up north.

“The name Gracie has no specific meaning to us – it’s just a pleasant sounding word,” Walker said.

Keeping Gracie in Tip-Top Shape: “We have only made minor changes to the exterior, not counting many hours or painting and varnishing,” Walker stated.

Aiming to keep Gracie in the condition she was first born into, Walker has only made three exterior additions to her: two kayaks and a dinghy.

“The dinghy replaces an inflatable that came with the boat, obviously not native to the 1950s,” Walker said, adding the kayaks are “his” and “hers.”

A number of decorative changes have been made to the interior, including a recently replaced ceiling material. Though Walker acknowledges the replacement was not authentic, it is more attractive and practical.
One distinctive touch is the hide-a-bed located in the forward cabin.

“I asked the previous owner, ‘How in the world did you get this aboard? It’s much too big to fit through any opening.’ He said it was disassembled and brought-in in pieces,” Walker said. “We wanted to recover it but avoid the idea of taking it apart, then putting it back together. I found an upholsterer who came aboard, made measurements and then returned to put it all together.”

At Home in California: Gracie currently calls Cabrillo Marina in San Pedro her home. She, along with her owner, is an active member of the Classic Yachts Association.