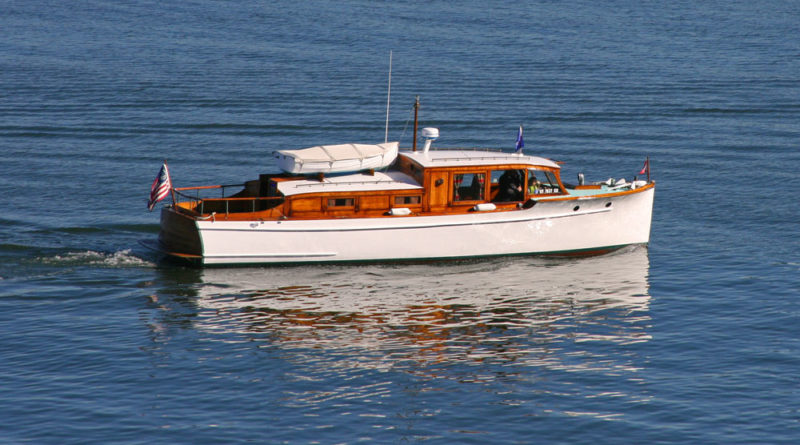 The Back Story:Lark is 83 years old. She is one of a rare breed of wooden yachts still floating on the water today. The boat was built in 1932 by Wilmington-based Fellows and Stewart Boatyard and continues to  navigates waterways in 2015.

Stephen Sheridan, who currently owns Lark, found the yacht in a Wilmington dry yard in 1985. She was a member of the Classic Yacht Association just a few years earlier (from 1975 to 1981), when her name was Sandman.

“Her current owner, Stephen Sheridan, found her in a Wilmington dry yard in 1985 looking very sad,” said Rick Olson, commodore of Classic Yacht Association’s Southern California Fleet. “Hundreds of these old wooden yachts were abandoned when they just got old and had too many things wrong with them. Most were broken up with forklifts and chain saws and returned to the Earth.”

According to Olson, Sheridan found Lark to be a dried-out yacht with light piercing inside of her from between the planks of her hull.

Sheridan, a do-it-yourself enthusiast, was just 26 years old when he purchased Lark. He spent the next 29 years intermittently working on her. She had no engine inside her while at the boatyard. Someone who worked at the boatyard pointed out a 1962 six-cylinder Perkins Diesel engine. The engine powers Lark today, thanks to a lot of work put into it by Sheridan.

“This was before Internet,” Olson said. “With Stephen’s limited experience, most of the knowledge he needed to put her back together came from the assortment of ‘old salts’ that one found hanging around the boatyards in those days. It took three years to get her back into the water and of course she leaked severely at first until all the wood soaked up and swelled to a seal.”

A Slice of History: Sheridan’s work on Lark varied over the years. His career as a cinematographer and uneven cash flow impeded his ability to regularly work on the boat. One assignment nearly cost him his life. Sheridan recalled filming a project for UCLA Medical School in Iraq. He was in a war zone and rode along with an armored troop transporter that was struck by a roadside bomb. The cinematographer and yacht owner was left with a broken back but fully recovered and joined the Classic Yacht Association in 2006.

“I love seeing the look on people’s faces when they see a group of these great old boats together, especially the kids. That amazes me the most,” Sheridan said. “The kids have a sense that these old yachts are really something special.  They don’t really know why, they just know.”

Notes: Sheridan owns Lark with his wife, June. She is berthed at Holiday Harbor Marina in San Pedro.