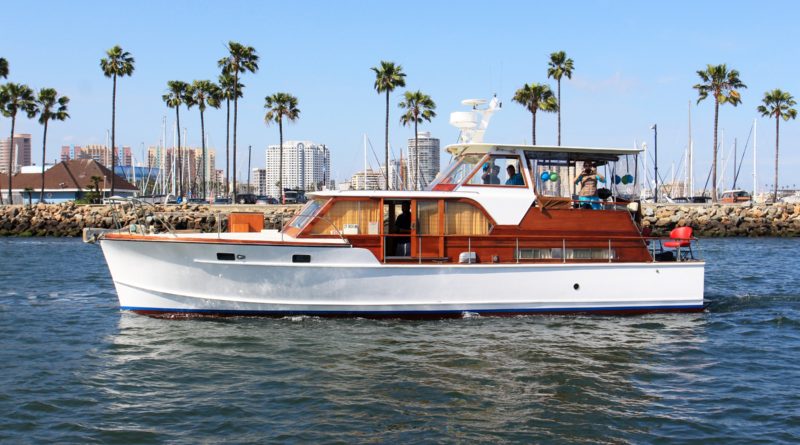 The Back Story: This classic wooden boat went by a different name (Halaski) at one time. The previous owner was unable to care for her, and his sons were not interested in the 1960 Matthews boat. Due to neglect, she became a derelict boat and the marina ended up with her. Carl Earhart and Martha Forero were looking for a project when they came across an ad on craigslist.org. They went to the marina in Wilmington. When they saw the boat, they noticed she was in bad shape. The engines didn’t run, and she was falling apart. Forero made an offer below asking. Based on the poor condition of the boat, Earhart made an even lower offer which was accepted. Had they not purchased the boat, Earhart and Forero learned later, she would have been scrapped. The purchase was made three years ago.

Restorations: Once the boat was purchased, Earhart spent time working on the boat. With a background in General Motors, Earhart was able to replace the batteries and fix the GM Detroit diesel engines. After replacing the batteries, the engine would turn over but not start. Earhart knew it was a fuel problem, so he pulled the fuel system apart. For three weeks, he worked on cleaning and fixing the fuel system until he was able to get start the engine. However, once the engine started, a huge plume of smoke caused a massive cloud in the marina. Earhart began working on the boat again replacing fuel injectors and other motor parts. The engine got fixed, the hull repaired and the paint stripped down to the natural wood. Then the boat was refinished and varnished.

What’s in a Name: People kept declaring the boat was dead and brought back to life. Coming from a religious background and people saying he resurrected the boat, Earhart named the boat Lazarus.

Interesting Features: The galley has a full-size refrigerator. The compartment appears as if it was designed for a larger refrigerator. The cabin has two twin beds separated by a built-in dresser. Earhart added some modifications to the boat. He redid the upper helm deck with a teak tile. Under the main awning, he has a switch which illuminates the whole vessel in blue light.

Future Plans: Earhart will keep tinkering with the boat. Both Earhart and Forero plan to take the boat to Catalina Island with their 17-foot 1975 Witchcraft in tow, so they can anchor Lazarus and race around the island with the Witchcraft. They are looking forward to new adventures in their old boat.