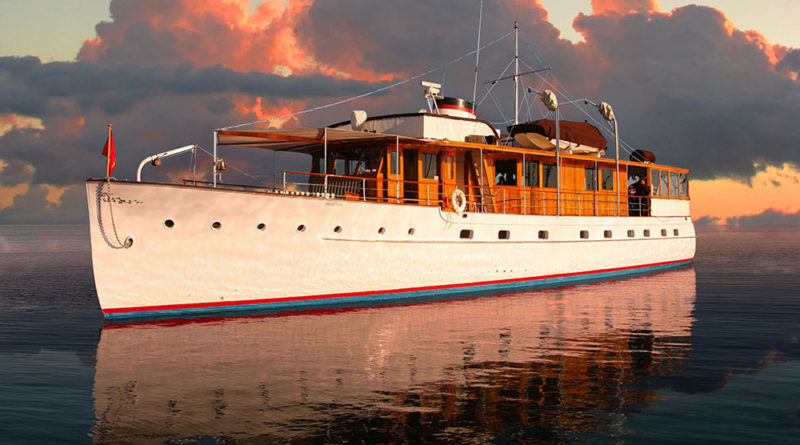 The Back Story: Constructed by famed yacht builder John Trumpy & Sons, the hull was designed to summer on Long Island Sound and winter in Florida.

The yachts were built with shallow drafts so as to comfortably transit the Atlantic’s Intracoastal Waterway. These vessels were heralded for both their comfortable and spacious interiors and held plenty of room for a complete wait staff and crew. Prided on elegance and a clean-cut design, Trumpys were considered the Rolls Royce’s of yachts.

“Although launched in 1947, the hull is clearly a 1930s style design with its plumb bow and stern and awning over the foredeck—very similar to Trumpys’ presidential yacht, the Sequoia,” said Jack Boyt, who has owned the boat with his family since 1982. “Trumpy referred to these as houseboats to emphasize that you can walk the length of the weather deck—from stem to stern—without going up or down a step.”

Mauretania was reportedly built for just over $60,400, but additional work to the hull brought the official total to more than $110,000.

What’s in the name? The vessel was originally launched for Col. Frederick Pope, who named the vessel Marylin—reportedly after his wife. The boat’s name was changed in 1979 when then-owner David Banta, who was searching for a name that exuded luxury, changed it to Mauretania.

What’s inside? The manual hydraulics for shifting gears and throttles, the ground tackle, cabinet and door hardware, plumbing fixtures and the pilot house gear are all original.

“It’s been fun to keep it up that way,” the owner said. “It was built in an era when equipment was expected to be maintained and repaired.”

The vessel houses three state rooms and has a crew quarter that includes a dining area, bunk area and a head, which is accessed by a staircase off the Butler’s Pantry.

The master stateroom on the vessel’s lower level is equipped with three hanging lockers and a private head. This level also includes sliding wooden privacy shutters on each window, as well as an original wall safe.

The vessel’s main salon is accessible from the main deck and offers an expansive living and dining area. The room is highlighted by rich mahogany paneling and silver-plated sconces.
The salon also features contemporary pieces with an original dining table, chairs and serving buffets.

A Killer Look: Mauretania has been featured in episodes of “Without a Trace,” “Criminal Minds” and “NCIS,” among others.

Notable Moments in Boat’s History: The vessel has gone through six owners. The original owner, Pope, was reportedly a senior official in President Roosevelt’s administration and the boat, along with a sister hull on the East Coast, were built side-by-side following World War II.

The vessel was purchased from an oil company and transported to California in 1979 by Banta, who brought it up through the Panama Canal from Florida.

Recent Notes: The yacht is currently being chartered for celebrations and special events throughout Southern California. It entertains up to 50 guests, and includes a personal chef and bar steward aboard.

“Chartering is one way to keep the yacht being used more frequently. Think of it in terms of an old house where everything needs to be used,” the owner said. “The engines need to be run, the toilets need to be flushed, the doors need to be opened and closed.”

To meet licensing requirement, every piece of the two-conductor original electrical wiring was pulled off the boat and replaced with three-conductor wires that includes a ground to meet modern safety standards.

A key component of maintenance has been the wood of the boat. Between 1989 and 1990 an extensive session in the boatyard replaced the wiring, and planks off the bottom of the vessel, which had some soft frame ends, were replaced.

One thought on “SoCal Classics: Mauretania”