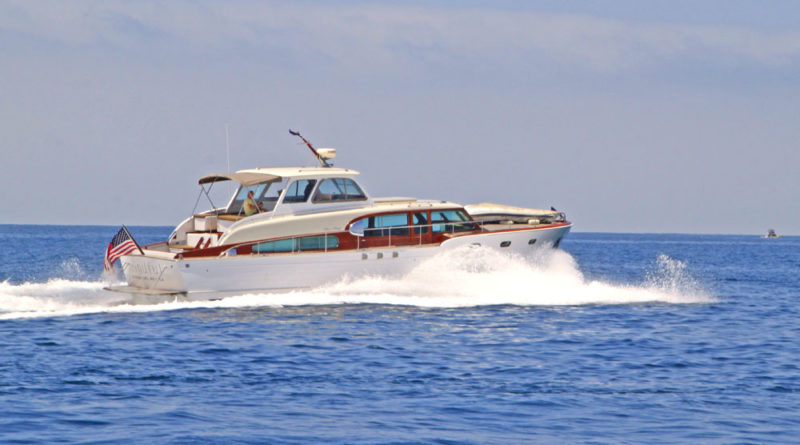 The Back Story: William “Bill” Brantley was reading an article in a power boating magazine about 10 years ago, where the author was commenting on the “perfect yacht” and how it had been decades since a boat designer crafted the ideal vessel.

“The article started with the advent of ‘bloats’ in place of boats in the recent decades of yacht design,” Brantley said. “He was making a lot of sense and almost had read my mind from a design perspective. He then proceeded to ramble on about the perfect yacht and how no one had come close in more than four decades. I flipped the pages and there she was, one of the 26 Conqueror hulls streaking across the water.”

Brantley eventually bought Mindful. He says she is one of only six or seven of the original 26 he had been able to locate.

“She is used regularly to keep her alive and working, she loves a five-hour cruise up the coast and stopping for dinner or lunch,” Brantley said, adding friends and family helped restore Mindful to tip-top traveling shape. “As the fourth caretaker of the boat, we began the restoration process with the full intention to make her a useable, traveling boat.”

A Slice of History: “The importance of this particular yacht is her design,” Brantley said. “This is a post WWII boat. Modernism had arrived [and] 1955 was a pivotal turning point in American and international design. Chris Craft is about melding design into the wood boating world.”

The Chris Craft Conqueror was also a submarine chaser in San Diego and Navy research vessel for war games and training during the 1970s and 1980s.

“She still has drop tubes [with 24-inch diameter] through her hull if you ever feel the need to drop a depth-charge,” Brantley said.

What’s Inside: Mindful has been updated with modern electrical, plumbing and power features. Under the hood is a twin 420-horsepower engine (and Yanmar diesels for 840-horsepower).

“Mindful can compete for reliability and comfort with any plastic ‘bloat’ around. The hull and cabins are designed to experience the sea and air. You are fully aware of where you are riding on top of waves like a great long board on a gentle 5-foot high curl,” Brantley said.

“She has a sleek look,” Brantley said. “The more popular flush deck Chris Craft Constellations were roomy but could not muster the look and the amount of light below deck. You were more connected with the water and less enclosed.”

All in a Day’s Work: “For the restoration we started with the bottom, which had been refastened once before and in good condition, we wooded the hull sides, refastened with [more than 3,000] silicon bronze screws, removed the seam packing and inserted a beveled batten set in West Systems. This is after consulting with individuals doing restorations at the famous Hershoff Museum,” Brantley said. “Then we faired and painted with three coats of LP paint. The decks rebuilt and restored to teak. We purchased a Honduras log and started milling all we could and replaced 65 percent or greater of the entire upper salon and decks. We decided to use as much modern technology for wood restoration as possible.”

Notes: Mindful is a member of the Classic Yacht Association.