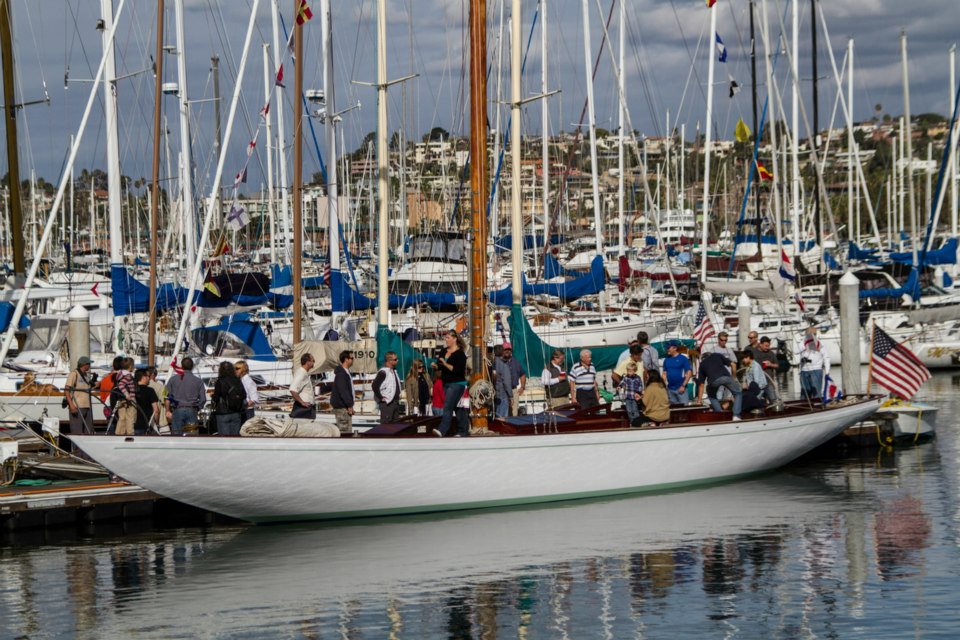 Year Built: 1928. Naval architect W. Starling Burgess — creator of three winning America’s Cup yachts — designed 14 fairly identical 10-Meter Class sloops, built as a one-design fleet. The plans were shipped to Bremerhaven, Germany, where Abeking & Rassmussen shipyard would build the vessels, including Sally. The boat was then brought on a ship to Halifax, Novia Scotia, to avoid paying import duty, and was sailed to the U.S.

“The boat was built to be lifted onto a ship,” explained the vessel’s owner, C.F. Koehler, founder of Koehler Kraft boat yard in San Diego.  “The boats had lifting eyes, like on a J/24 or a small sailboat you would launch from the hoist,” he said. “This boat, if you lift up the floorboard, like on the dining room table, there were these giant eyes. Huge tables can be passed through the hatches and hooked to a crane to be lifted.”

Notable Moments in Boat’s History: Sally raced in — and won — the Lipton Cup for San Diego Yacht Club. She would also race and win it for Catalina Island Yacht Club in 1940. Koehler, who has had the boat since 1991, won the big Master Mariner’s Regatta in San Francisco, with first-to-finish and first overall honors. Sally also won the Varuna Cup.

“The last 27 years, we’ve been just sailing up and down the coast — sailing in all the famous races,” Koehler said. “Sometimes we do really well; sometimes not so good. But even if we don’t win the race, we always win the party.”

Famous Skippers Who Have Been Aboard: Multi-time America’s Cup winning skipper Dennis Conner sailed aboard Sally in 2007, racing alongside Koehler in the San Diego Yesteryear Regatta for classic yachts.

“My son, who was an infant, was aboard with us. He’s 6 now — so, that was pretty cool,” Koehler said. “Carl Eichenlaub sailed with me every once in a while.”