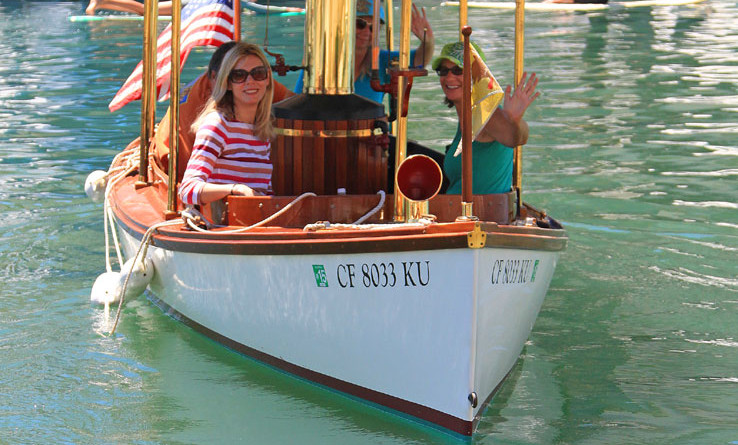 The Back Story:Southern Bay is an exact replica of a Duffy look-a-like built by Truscott Boat Mfg. in 1905. She is about the size of a Duffy boat. The Michigan-built boat became a known brand on the West Coast around 40 years later, when Truscott expanded production in 1945.

“Southern California’s marinas and harbors are cruising grounds for hundreds of little Duffy’s boats,” said Rick Olson of Classic Yacht Association (CYA). “Southern Bay is one that turns heads wherever she goes. She is modeled after a 1905 launch built in Michigan more than 100 years ago. If her Great Gatsby styling doesn’t catch your eye her locomotive style steam whistle will catch your ear.”

A Slice of History: Olson said Southern Bay was eventually sunk into a New Hampshire lake after she was no longer deemed useful.

“An eastern family owned and used the launch for 40 years. When it fell into disuse she was purposely sunk in the cold clear water of Lake Winnipesaukee in New Hampshire with the intention of preserving her wood,” Olson said. “Eight years later she was raised still in good shape and a mold was made of her unusual hull design. In this way fiberglass duplicates could be made for the reproduction.”

The CYA president added Beckman Limited, a company in Rhode Island, remade the launches and named them “Truscott Compromise.”

“The Compromise hull shape is what is unique.  It is a blend of a Canoe stern and the underwater shape of a Drake stern, which gives the boat less ‘squatting’ and more stability as she glides through the water,” Olson said. “Drake sterns were named after Sir Francis Drake. The waterline of his ship stuck out farther than the deck above it, giving the ship much less squat and roll.”

What’s Inside: A live steam boiler and two-cylinder steam engine powers Southern Bay with 10 horsepower; she is also equipped with a steam whistle.

“This modern version of old school technology provides 10 horsepower which is adequate to push the boat along briskly,” said. “The live steam exhausting and the powerful steam whistle is a crowd-pleasing touch of nostalgia.”

“She is adorned with a great deal of polished brass and her green and white surrey top ads to the turn of the century charm,” Olson said.

Notes: Southern Bay was voted “Best in the Show” at the Sacramento Delta’s B&W Steamboat Show. She is owned by Jim Kroeger of Pasadena.

“The boat can be seen cruising the harbors form Newport to Marina del Rey and has also been launched on most Southern California’s lakes,” Olson said. “She regularly is show along with other classic yachts at CYA events.  Jim never has a lack of volunteers ready to take a ride.”