State agency to draft action plan to pursue environmental justice, but will the vision have bite?

STATEWIDE — Marvel Studios is set to release four superhero films in 2017. None of them feature members of the California Coastal Commission, yet the quasi-judicial agency hopes to position itself as fighting on the frontlines of environmental justice.

Of course many questioned this very idea in early 2016, when commissioners voted to fire Dr. Charles Lester as the agency’s executive director. Many considered Lester to be the Coastal Commission’s greatest asset when it came to environmental policy and stewardship. Firing him, it was believed, could only mean the Coastal Commission would be at the mercy of real estate developers, who thought the agency’s firm environmental policies were a major barrier to lining California’s waterfront with profitable projects.

About 13 months later, the Coastal Commission appears to be dabbling with the idea of establishing a policy on environmental justice. A draft policy was to be deliberated on the dais when commissioners met in Ventura on March 8, however the discussion was postponed. 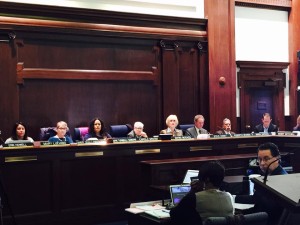 The Coastal Commission won’t be meeting in April, meaning any discussion on the agency’s environmental justice policy will be forestalled for a few more weeks, at minimum.

Language of and references found in the Coastal Commission’s staff report on a proposed environmental justice policy seem to indicate the public’s worst fears of Lester’s firing might not be coming true.

A legislative finding of Proposition 20 emphasizes the state’s policy to protect coastal resources, stating, “It is necessary to protect the ecological balance of the coastal zone and prevent its deterioration and destruction” in order to promote public safety and “protect public and private property, wildlife, marine fisheries, and other ocean resources.”

Additionally there have been several efforts in Sacramento to regulate or ban ex parte communications, an action allowing commissioners to communicate with private parties, some of whom might have skin in the game and would want to gain the commission’s favor.

The commission itself appears to have made some effort to walk the walk, demonstrating its commitment to protecting California’s coast (and overall environment) by firmly voting against plans to develop 401 acres of open space near the Newport Beach coast. Many saw this decision as a litmus test of whether the Coastal Commission’s dedication to protecting California’s environmental assets would fall to the wayside, allowing developer interests to rule the day.

More recently the Coastal Commission challenged the Port of San Diego’s approval of a waterfront development replacing a longtime dining establishment with a newer restaurant project promising to be bigger and better.

Commissioners, on one hand, were well in their place to question the developer’s plans. Does a dock-and-dine catering to private boaters prohibit public access to the water, for example? There were also questions of whether the general public would be discouraged from accessing public viewing areas of the waterfront by being forced to enter a restaurant.

Perhaps this is all a care of severe hair-splitting. The Coastal Commission’s draft environmental justice policy does strike many chords.

California law, according to the Coastal Commission’s draft policy, defines environmental justice as “the fair treatment of people of all races, cultures, and incomes with respect to the development, adoption, implementation and enforcement of environmental laws, regulations, and policies.”

Applied to the boating world this would mean ensuring anyone and everyone access to the water, regardless of whether your boat, kayak, paddleboard, canoe or other vessel is docked in a marina, stationed at an anchorage, on a trailer and hitched to the back of a truck or stored in a rack.

Interestingly enough the draft policy stated there are deficiencies in the state’s pursuit of environmental justice.

“The Coastal Act’s vision of coastal protection and access for all the people has not been fully realized,” Coastal Commission staff stated in its draft policy. “In addition to the enforceable policies … protecting water quality, open space, public access, and lower-cost visitor serving and recreational opportunities, the Coastal Act’s original construction included policies protecting affordable housing, which were later amended out of the Act.”

Philosophical platitudes continue later in the draft policy document, where Coastal Commission staff points out California’s substantive population gains, evolving demographics and a growing body of judicial and policy decisions created “intentional and unintentional barriers to public access not only to the beach, but to the broader benefits of coastal protection, and the Commission’s public process itself.”

“Not only is access to the coast for all Californians essential, equally so is protecting coastal resources so that future generations of all Californians can enjoy the beauty and opportunities the coast provides to those lucky enough to live directly along the coast,” Coastal Commission staff stated in the draft policy document.

To its credit, the Coastal Commission stated it would solicit public feedback on its drafted environmental justices’ policy and develop a working group to implement principles in regions across the state.

Public input is both vital and necessary to hold the Coastal Commission accountable in its pursuit of environmental justice and coastal access.  Feel free to contact the commissioners and staff members below to give them your input.

The draft environmental justice policy can be viewed online.