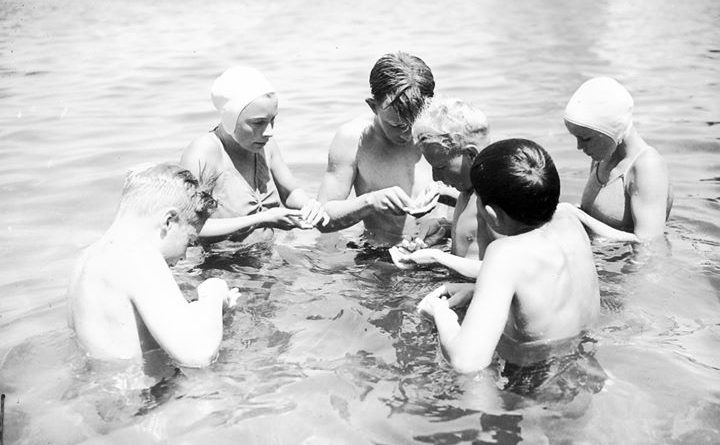 AVALON—The Catalina Island Express rolls into Avalon Harbor these days with very little fanfare. No children clad in bathing suits chanting “throw a coin” greet her arrival into port; that treasured pastime belongs to the children who grew up on the island between the 1890s and 1960s.

“Coin diving” on Catalina Island dates back to the 1890s. As the steamers would dock at the pier, kids would row out or swim to the ship, bellowing “throw a coin!” at the passengers onboard. They would then dive after the money tossed into the water by the passengers.

William Banning, who purchased the island in 1892, owned Wilmington Transportation Company which operated a fleet of coastal steamers between San Pedro and Avalon starting in 1888.

“Visitors to Catalina Island during the past summer were greatly amused and incidentally relieved of their small change by the antics of a number of youths who would swim out to meet the incoming steamers and then offer to dive for coins,” an article published in 1903 in the Los Angeles Herald reads. “The passengers enjoyed the sport and as many of the youngsters were excellent swimmers, but few coins were tossed overboard that ever touched the bottom.”

The tradition would continue through the days of S.S. Catalina, also known as The Great White Steamer. The 301-foot steamship provided passenger service between Los Angeles and Avalon from 1924 to 1975. Avalon native and historian Chuck Liddell recalled his own experience in the 1960s diving for coins in an online blog post.

“I stood on the rocks, south east of where the ‘Busy Bee’ Restaurant now sits, and bellowed to those going to the boat called the ‘Blanche W’ and other excursion boats leaving the ‘Steamer Pier’,” Liddell wrote.

“If you made it through the day (the ship arrived at Noon and left at 4:10 pm, except on weekends, when it would generally make two round trips), you were usually in the water around an hour when it arrived and an hour when it left, you could easily get $15 or more in a day, which, in those days, was enough for some of the ‘mainland’ college kids to be able to eat three meals a day, stay in a nice hotel, and take their ‘summer romances’ to the Casino to dance that evening,” Liddell continued.

Liddell recalled another tradition growing up.

“On the pier, as well as at the foot of the pier, leading into town, another custom was in play,” Liddell wrote. “The locals and visitors who arrived earlier had formed a ‘gauntlet’ where they would line up on both sides and the newly initiated tourist to walk between these rows of ‘natives.’ It gave the new arrivals the feeling of being ‘greeted’, which continued until the Steamer Pier was torn down in 1969.”

S.S. Catalina was taken out of service forever in 1975, shortly after the Steamer Pier was torn down, and the beloved tradition of coin diving slowly died off.