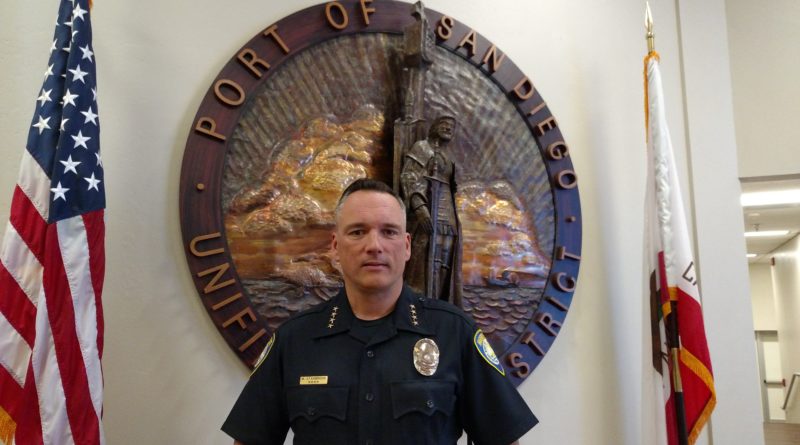 SAN DIEGO — San Diego Harbor Police Chief Mark Stainbrook, who March 1 became chief and the port district’s vice president of public safety, realized early he wanted to become a chief and prepared accordingly. He joined the Los Angeles Police Department following service in the Marines, found the right mentors and undertook key assignments in patrol, gangs, internal affairs, intelligence and counterterrorism, while continuing in the Marine Reserves. Like most senior officers tagged as future leaders, he graduated from the FBI National Academy.

When former Chief John Bolduc looked for a deputy chief the well-qualified Stainbrook was a natural choice. He twice served as acting chief and provided a stable transition for a department, which, prior to Bolduc’s arrival, endured too many short-tenured chiefs.

He sees education as essential to improving safety on the water, encouraging boaters to get their California boaters’ cards and hands-on training.

“Especially on holiday weekends officers see boaters who take their boats out only once or twice a year and don’t know what they’re doing. Refresh yourself on the Rules of the Road and get training on your own boat from an experienced captain,” Stainbrook said.

He explained it’s the roving petty thieves who cause boaters and tourists much grief. He urges prevention and vigilance: lock up your boats, cars and bicycles and don’t leave “pocketable” electronics, credit cards or money unattended anywhere.

Despite the prime role SDHPD plays in patrolling and protecting the San Diego harbor, California’s fourth and the nation’s ninth largest, the department faces the challenge of not being taken seriously by the general public.

When preparing to interview Stainbrook, I mentioned my meeting to friends.

“Oh, that’s not a real police department,” one commented.

Oh, yes, it is. While it began 55 years ago as a team of security guards, during the ‘70s and ‘80s SDHPD developed into a fully professional police force, with officers graduating from the same police academy as other law enforcement officers. It now handles about 60,000 calls per year.

While it may be small – only about 135 current sworn officers – compared to San Diego’s approximately 1,800 officers and L.A.’s 9,000 officers, SDHPD is a fully-functioning police force, overseeing public safety within the tidelands and waters under the Port District’s jurisdiction. The only crime they don’t handle is murder investigations, which they pass to local police.

Unlike most police departments, SDHPD’s officers are all cross-trained in firefighting, boat operations and airport security, since officers fight fires from the water aboard specially equipped boats and patrol and provide security to San Diego International Airport. They also have a SWAT, specially trained for marine operations, and a team of about 20 divers.

What should boaters watch for to help protect our waterways, whether in San Diego or elsewhere?

“Watch for something that looks off: a boat that’s overloaded or sitting too low in the water, with too many on board or too little or too much safety equipment. Or where people are fishing in the wrong place or running at high speed at night,” Stainbrook explained.

With education and vigilance, we can all be safer at sea.